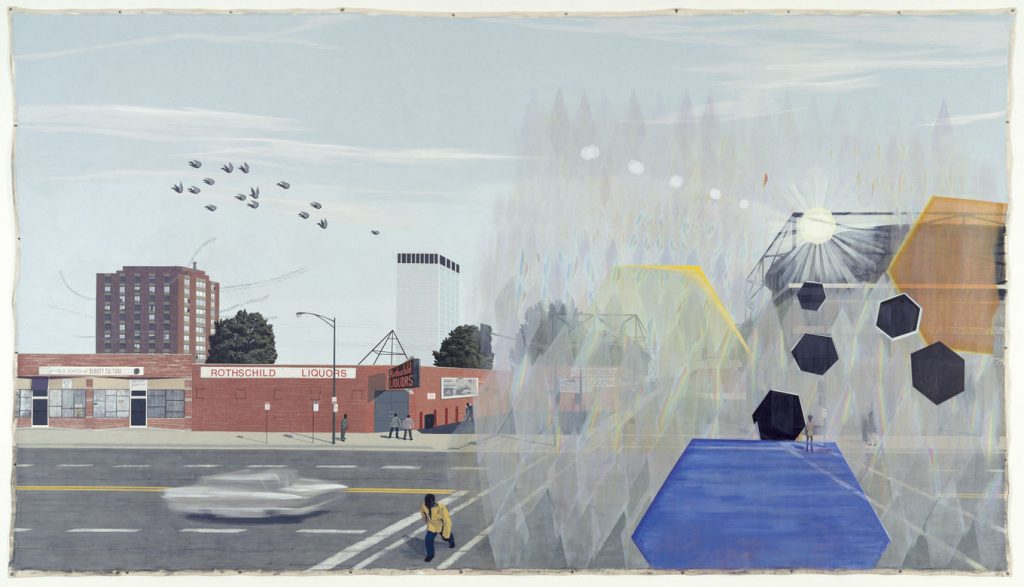 Morning outside Kerry James Marshall’s studio at 39th and Indiana. The gently sunlit streets are empty except for a small coterie of people waiting for a bus. A liquor store, beauty shops and churches are within view. Birds flutter overhead. Trees. Street signs, pavement and trash. Vacant lots. Car engines ricochet off the rows of one-story buildings down the block, sound peaking for an instant before disappearing back into stillness. Music plays just beyond earshot. “Been that way for decades,” Marshall will tell you.

His painting “7 am Sunday Morning” offers a nearly life-sized perspective of this street scene. A perfect surface uninterrupted by evidence of a brushstroke spreads out across the reality, almost rising up from within the buildings, the grass, the ironworks. These one-story buildings, this watery blue expanse of sky, a Robert Taylor home in the distance, sheet music for gospel and soul tunes including “What’s Goin’ On” and “Crossroads Blues” dance out into thin air. On the far right of the image, a beam of light streams down through the railing past a water tower—yet, something’s not quite right. Behind and within the refracted light, the hazy outline of a building emerges. Atop that building sits the water tower through which the refracted sunlight flows but, in reality, neither building nor water tower actually exist. Though they appear here on the canvas, these structures represent an extradimensional world revealed only in the instant depicted on the canvas. Marshall refers to that light as “a blinded space where hallucinations can occur,” a place imagined into existence from the view outside his studio. 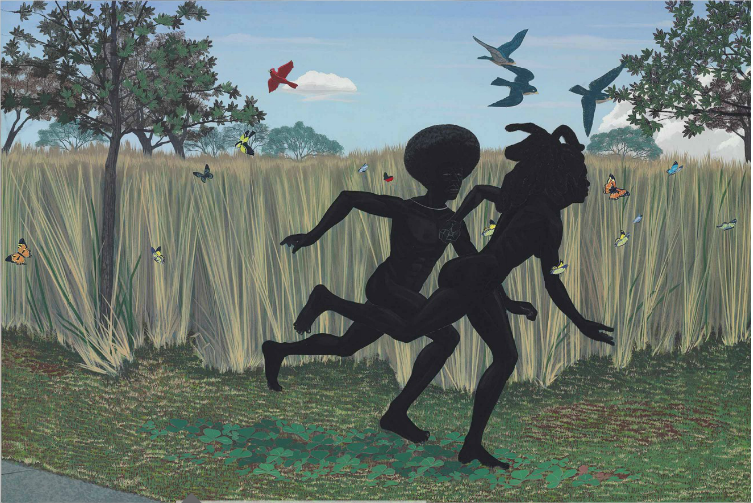 Inside his studio, shelves are filled with cans of Campbell’s soup. On another shelf across the room, white and red thermoses are stacked one atop the other. A bouquet of blue, orange and yellow flowers sits on a table in a far corner of the back room. A sign from the 16th Street Baptist Church, a collection of Kabuki dolls. Bottles of Tylenol fill the corner of a desk; four toy firemen’s badges still in plastic hang on the wall. Amidst such evidence of the long stretches of time spent here, a row of huge black granite sculptures, draped in plastic drip covers, solemnly loom, ready for shipment: these are the artist’s Cubist renderings of the continent of Africa.

A full-time professor of art for the past eight years at the University of Illinois at Chicago, Marshall is a reserved and calm man who dotes on questions asked of him. His upcoming solo exhibition at the Museum of Contemporary Art, “One True Thing: Meditations on Black Aesthetics,” encompasses worlds torn between cultural traditions. “I wanted to really look at what that means, to demonstrate what a black aesthetic is,” says Marshall, who cites the heavily patterned work that came out of the Black Arts Movement (or BAM) of the seventies as a point of departure, including the recurrent Egyptian pyramidal design. “To work with an elliptical set of references in which everything refers to being black, that takes the idea of being black for granted, images that are relatively prosaic or mundane, and then let the evocation of black aesthetics seep out,” Marshall explains. Among the sources Marshall employs are ancient African mythological figures, including a Congo nail fetish, called a Nkisi, sometimes adorned with tiny stomach chambers inside of which are stored magical substances. Most documented statues resemble porcupines since, when believers had a wish they wanted to fulfill, they would drive a nail into the small figurine. “When you drive the nail in, that secures your request,” says Marshall. “And Nkisi get their power from repeated use.” 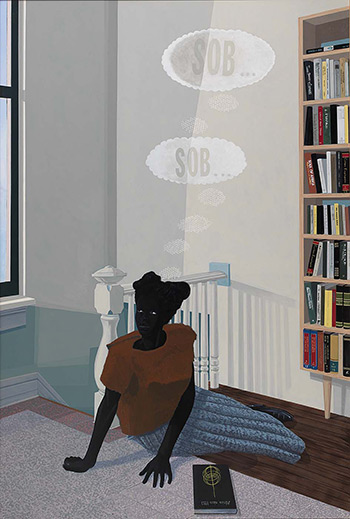 Marshall’s repertory of ancient gods include Senuto—executioner figures, with long, pole-like arms. “They used these in trials, moving the long arms to point out the guilty. And the Boli were from Mali,” says Marshall, pointing out the black-and-white photograph of a large, stone-like figure with no eyes or ears that resembles a buffalo. Boli figures were ritual objects that were often buried. “A mysterious figure, like an animal. Boli were transitional, they escorted people from the material to the spiritual world.” A host of others follow: Elsiji figures were replacements for a dead twin. Oba figures from Benine were warrior king figures, often appearing in bronze casts posed with a sword. Marshall has sculpted each figure as a study, making a Senuto for instance, out of cloth sacks and twine.

Rifling through a stack of papers, Marshall takes out a panel from the comic-strip art that will also appear in his MCA show, a fully colored image depicting a Nkisi, Senuto, Elsiji and Oba darting through the panel like a team of superheroes rushing into battle. To the far left, a Boli, large as a meteor, floats into the frame. Marshall pulls out another sheet, this one depicting a night scene in a museum, security guards gazing confusedly as they wander through a whole room of display cases with their glass frames broken out. “They escaped from the museum, actually the African wing at the Art Institute,” says Marshall. “In a sense, they’ve escaped.” 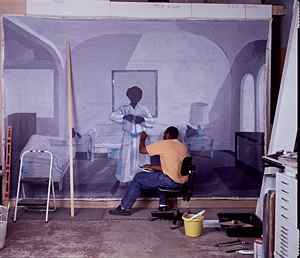 Every day Marshall reads the funnies in the Tribune. “I was a big Peanuts fan,” Marshall says of his comic-art influences. “I used to read Doonesbury, Non Sequitur, Dilbert, The Boondocks, and I noticed how infrequently a strip by a black artist was getting syndicated. Something like Where We At? didn’t really take off. That strip ran for a little while, but it wasn’t really clever. It was kind of a black version of Sally Forth. Certainly, it wasn’t controversial.”

He often takes the news as his subject matter. One sequence of panels that forms a central part of the story in his MCA show examines the CHA demolition that precipitated the relocation of tenants from Stateway Gardens projects at 37th and State as the second of “two great migrations” experienced by the black population in Chicago. “The people are refusing to leave because they think the whole thing’s unfair,” Marshall explains of these often chaotic and sometimes violent scenes, pointing to a series of panels that lead up to a panorama of buildings and streets drawn to resemble a commercial for a moving company. In another series of five panels, Marshall has rendered a figure from several different views, as if seen from five different camera angles. The phrase “Everything will be alright, I just know it will” appears repeatedly in several different panels as the displacement of the main characters in the CHA drama continues apace.

Finishing his comics requires that his drawn-and-inked pages be transferred onto newsprint, to more closely resemble strips in daily papers. “That also allows me to position them all over the page,” says Marshall. “If it all comes off correctly, there will be three or four stories that all connect to make an epic story, like it was released episodically. The whole thing starts somewhere in the middle, kind of like the ‘Star Wars’ trilogy started in the middle of the story.” Besides including the Rhythm Master comics he produced for the 2000 Carnegie International exhibition, Marshall has produced eighteen new sections, often with multiple panels, some with three frames.

Another key section in Marshall’s series of comic art depicts a townhouse with a sign in the front lawn: “The Ancient Egyptian Museum.” “This character encounters a man here who teaches him his African powers,” Marshall explains. “This was a real place, and there are Afrocentric scholars who discuss mystery systems; Kismet, come down out of African Egypt, that show how black people were integral to the rise of Egypt. But this little townhouse—that’s how this happens, you inadvertently stumble on this source of information. It’s a source of tension in the black community on some level, the spiritual differences between black and European traditions.”

In those spiritual differences Marshall finds a major perceptual schism, a cultural inability to see or not see what’s present. “It’s a metaphysical idea. I’m interested in what happens in that space of between perceptions.” Nothing conveys this more powerfully than “Black Painting,” a night scene that, upon first seeing it, stunts the viewer’s vision with the sheer density of its blackness. Upon sustained viewing, however, shapes slowly emerge, black-on-black, until coalescing to form indiscernible abstract representations, then solid geometries and finally a bedroom scene. A man sleeps in a dim moonlit room, his black panther lamp curled up in a subtle, enchanting reference to the subject matter of a black unconscious soon to awaken.