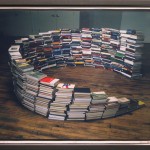 Is the act of reading a book on par with using candles instead of lightbulbs, or as George Orwell terms it, a “sentimental archaism”? There’s a charm to reading a novel, poem or essay that isn’t felt when glancing at images, our days’ true medium of meaning. It’s as if to read is to lift the lines off the page with the eyes, thus to receive a transmission from the past and bring it to life in the present. Sentimental, indeed. 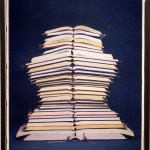 In fact there really isn’t anything much less contemporary than reading a book, no matter the vogue of antiquing or retro-fashions. Books, like deep containers of a distant past, are fairly emblematic of the search for cosmic order, universal emotions, Truth and eternity—values that barely make any sense today. We are no longer a literary breed—does that mean we no longer care to knock on the door of posterity? “Remember me is all I ask/And if to remember be a task: Forget me,” mournfully sings Laurie Anderson. It’s okay to resign yourself to oblivion, safe in the knowledge that today’s actions are important—but only for today.

Every dying breed has its share of enthusiasts. Buzz Spector is widely regarded as an upholder of the faith. The Chicago-born artist often makes sculptural stacks using books as building blocks, then photographs them. In one, a semi-circle of stacked books invites the viewer into its center like a fortification or safe room against fast-paced culture. Another work is a simple stack of books opened to their middle and placed atop each other. The curvaceous form is a small monument to the very thing it is produced of. It is not reference-desk librarian elitism that composes the general feeling of Spector’s book works, but, as a (shirtless!) self-portrait amid his own collection of books attests, it’s the charming nerdiness of the bookworm.

One work, a structural stack of books all by and about the poet W.H. Auden, evokes the book collector’s delight in hoarding and displaying his favorite author. In his famous essay “Unpacking my Library,” Walter Benjamin writes that the unique cross-section of titles in his collection defines himself as a collector and a reader. Arcimboldo’s portrait comes to mind, where a pink chapbook is a man’s cheek, the spine of a big red book is an arm, bookmarks compose the fingers, and so on. Writes Benjamin: “The most profound enchantment for the collector is the locking of individual items within a magic circle…” In the early history of art, a picture served as the perfect illustration of a text, Biblical or otherwise, for an illiterate audience. Here, now, Spector’s magic semi-circle uses the book itself to illustrate a bookish concept.

Sandra Perlow’s new painting cycle gains inspiration from TS Eliot’s poem “Ash Wednesday” from 1930, written after the poet’s conversion to the Church of England. The poem is laden with the conflicts of finding oneself in religion and the subtle harmonies that emerge from a wrecked self. So, too, in Perlow’s paintings. They are composed of old decorative papers and pieces of painted paper collaged together, all painted over again, often with a central symbolic motif, such as saltimbanque-like hats or a geodesic structure. Abstract meanings build up to an un-definitive result, and that’s their power: they are personal in the search for the universal.

Perlow has been painting for over forty years. She is of the same generation as the Chicago Imagists, so personal iconography is second nature for her. Over time she developed a collage/painting style that blends the trickiness of paint (its ability to cover any surface) and the good nature of collage (its ability to play well with others). As if by luck or by faith, the parts click. Is it possible for abstract painting to contain narrative elements? “What is actual is actual only for one time/And only for one place,” writes Eliot. In one “scene” Perlow fits many elements of the time-based art of story telling so that both process and product are simultaneously visible.

On Saturday, January 12, Marc Fischer will allow viewers to explore a decade worth of correspondence shared with French artist Bruno Richard. Artwork is so abundant that the sum of the exhibition is only quantifiable by weight—over sixty pounds of writing, CDRs, magazines, photocopied drawings and whatever other errata Richard could fit into an envelope are fully accessible. Some materials on view had been included in last year’s “Exalted Trash” at Columbia College, but only within untouchable vitrines. Richard’s letters, often featuring adult content and taboo subjects like suicide, torture and talking about one’s income, will surely provide generous access to the world of friendship shared between himself and Fischer.