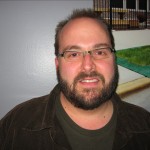 For someone who loves watching videos, I was surprised to learn that Jefferson Godard got rid of cable television months ago. And yet there is no lack of something to watch in Godard’s apartment. With two rooms dedicated to screening his video-art collection, Godard can jump from his menacing Kara Walker shadow-puppet piece to any number of bluntly sexual works by emerging and established artists. In fact, Godard didn’t throw out his TV set, but placed it on the floor in the smaller screening room; it now plays the second channel of his Jay Heikes piece, showing a loop of a lit candle bursting into a rush of flames. While it’s a fairly typical habit to leave an unwatched television turned on for background noise, Godard instead leaves his video art on. There’s a cuckoo clock in Heikes’ video, and it punctuates Godard’s normal household activities with a craziness found only in a fun house—or an art house.

Godard has come to be known in art-collecting circles as The Video Collector from Chicago. This is a unique designation, as most collectors of contemporary art won’t limit themselves to a single medium. For Godard this began as a practical decision, as the medium is essentially immaterial and doesn’t contend with the furniture. After Godard screened a few videos for me, he pulled out a stack of papers and a book of CDs. These were the “official” works of art, he said, noting that what we were watching was simply the viewing copies. They could be replaced if deteriorated (say, scratched)—but not copied or distributed. This was detailed in the papers along with exacting specifications for viewing: the size of the room, the brand of speakers.

Indicative of Godard’s taste is the Brooklyn-based artist in his collection, Carlos Rigau. “Blackface Beyonce” contains two elements that can be seen across Godard’s library, namely the music-video esthetic and the theme of the macabre. In “Blackface Beyonce,” Rigau, dressed in wig and blackface makeup, sings wild-eyed and out of sync with Beyonce’s hit “Crazy in Love.” The piece ends with Rigau pointing a gun at his head. It’s at turns ridiculously offensive, ridiculously funny and, well, catchy. Music videos are ubiquitous in our iPod-ized world and in Godard’s collection. Collected artists Phil Collins, Brendan Codey and James Murray also appropriate music and give them vision in their videos. Additionally, the ability to shock the viewer is a common thread. The mixture of pornography and slavery, body modification and public execution, sadomasochism and homoeroticism also feature prominently.

Godard’s riding of the cutting edge is emboldened by his unique philosophy of perspective. As a freelance architect, he has a particular understanding of space. Living in the city, he explains, is tantamount to experiencing a film. The density of the urbanscape requires that we move with a special awareness of the fourth dimension. In this, time changes our relationship to the places we move through, and causes Godard to believe that “a city is filmic.”

It seems the limits of reality are defined by art. Godard’s sensitivity and thoughtfulness on this point recently led him to a commission to create the new Filter restaurant, which was recently kicked out of its Wicker Park location. The sudden loss of Filter was certainly surreal. Its sequel will soon sit near Milwaukee and Ashland, and its design will incorporate renewable technology.

As the co-chair of Verge, a group of young collectors associated with the Museum of Contemporary Art, Godard’s passion has become his specialization. The Verge group, composed of twenty or so members, convenes to discuss local, national and international emerging artists. Godard describes Verge as a “think tank,” but they are also philanthropists. Twice a year they confer to buy a work of art and donate it to the MCA’s permanent collection. As such, they educate not only themselves in emerging trends, but also the museum and its audience with the newest crop of art.

Godard explained to me that an art collector is not simply someone who goes shopping for Louis Vuitton handbags (obviously he has a bone to pick with the recent Murakami retrospective, which invited viewers to shop at an in-gallery LV store); it seems you need more than just money to buy art. Godard is a cultivator of relationships, and he sees his collection as a form of personal support for the emerging artists he enjoys. Unlike collecting stamps or coins, one needs to know a variety of people who know how to open various doors. As a child, though, he started out collecting orchids, and this fact adds a fairly sweet side to the wealth of perversity in the collection. Too much perversity would perhaps be too tame.