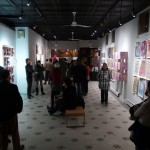 Having hosted openings for artists Juan Chavez, Mike Genovese, Chris Silva, Blutt and Revise, 32nd&Urban Gallery represents some of the newest and freshest homegrown work the city has to offer. The owners, however, are very conscious about keeping themselves out of the pigeonhole of contemporary “urban” art. It is their goal to attract as large and diverse a community as possible. One of the things they pride themselves on is having what they describe as completely different “crowds” at all of their shows.

32nd&Urban is special. Since its first show in January 2007, with more than 300 people in attendance, it continues to draw substantial crowds to its (south) South Halsted location. There are a few things about 32nd&Urban that are different from most galleries in Chicago—its location, the night of its openings (Saturday instead of the traditional Friday) and its attitude. Located at 32nd and Halsted in Bridgeport in a building that was once a community barbershop (there are still holes in the floor from the barber chairs) 32nd&Urban gallery is shaping the community around it. An area that was once barren is now filled with potential for change. The gallery’s neighbor, the Co-Prosperity Sphere, jokes that Bridgeport is the “community of the future.” It’s also home to the Zhou B. Art Center and a growing number of artist studios.

The space was imagined by four born-and-raised Chicagoans, two South Siders (Peter Kepha and Lauren Pacheco) and two West Siders (Monika Lee and Pedro Soto Jr.)—all lifelong friends with art and entrepreneurial experience. They have all been involved in the Chicago art community for some years as producers and consumers. Their first event was a welcome-to-the-community-type of affair in December 2006, which included live art and DJs. This event was their opportunity to network with the art community and get their name out there. Having a limited marketing budget, they relied on guerrilla-style marketing, which was successful and got the word out. Many of the “who’s who” in the Chicago art community showed up for their first opening in January.

Peter Kepha is the principle curator and main artistic drive behind the gallery. Peter has been an artist all his life but has evolved also into a gifted curator. He started as a graffiti artist and then became a muralist working with CPAG, Chicago Public Art Group, the organization responsible for most of the legal murals in Chicago. Speaking with the founders of 32nd&Urban reminds one that art has potential to influence the larger world around it. They understand that there are areas that are over-saturated with art, but that the South Side needs creative endeavors as well. Asked if there is a particular type or genre of work they are looking for, they all echo, “Good art, we are looking for GOOD art.” (Sara McCool)