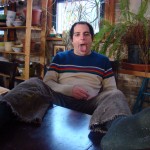 Derek Erdman recently celebrated his 34th birthday, and has only been selling paintings since he was 27, but has managed to become one of the most likable artists in Chicago in the past decade. Over the course of his life he’s made more than 2,100 paintings, and sold more than 2,000 of them. In the year 2007 alone, Erdman made and sold 700 paintings, the average price for which is a modest $50, especially considering the already unrelenting demand for and ever-growing popularity of his work. Erdman often throws exuberant art parties at his Bucktown house, to which he refers in his invitations as the “Erdman Art Hut” (Erdmansion is more like it), though he claims to try to stay “as far away from the art scene as possible.” Problem is, the scene won’t stay away from him. “Down-to-Earth” is a cliché, yes, but what else do you say about the guy with whom everyone wants to get down?

Last year, Erdman showed work in Seattle, LA, New York, Cleveland, Austin, San Francisco and Chapel Hill, as well as in Chicago. Through April 2008, Erdman is already booked for two shows each in New York City and Seattle, and one in Portland. Because of his recent national success and exposure, Erdman has announced plans to increase prices (averaging $100 per painting) so that he might be able to focus more on quality, less on quantity. “I want to make less paintings…I want to make more, better paintings,” Erdman says, casually, colloquially, cordially (characteristically). Moreover, the Cleveland, Ohio native (and eleven-year Chicago resident) has expressed an interest in continuing to explore new materials and forms apart from his traditional wood and canvas squares—such as framed windows and life-size scenes in which the heads of characters are cut-out holes to allow for the viewer to enter into the painting (such as at carnivals and fairs). Other recent inspirations include Michael Jackson, Washington, D.C. Belway Snipers, Lee Boyd Malvo and John Alan Mohammed. (Angeline Gragasin)