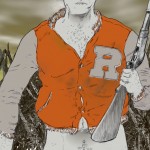 As a teenager, most of my heroes were insane. Whether it was the influence of the grungy drug-addled kids I hung with or my own personal search for something, anything beyond rote middle-class existence, centerfolds sporting Syd Barrett’s Pink Floyd and “A Clockwork Orange”’s Alex hung like proud banners in my suburban bedroom. As role models, their take on reality represented a privileged view. Like a small window cut high in a wall, this view was totally inaccessible to me, and so all the more desirable. Cosmic quandaries, mind expansion, over-stimulation and a taste for violent nonsense seemed productive and fulfilling. Later, when I came to realize that there’s nothing really glamorous about psychosis, that we should not aspire to depravity, I, like most everyone facing independent existence outside of the coddled life, refined my search for the crazies into acceptable neurosis. “Everything great in the world comes from neurotics,” wrote Proust, my newfound hero.

For the artist, insanity can mean giving form to limitless imagination. Once lived, though, insanity is chaos. Artist Troy Richards, wishing to adequately represent the madness that rages in war-torn cities far away to an all-too-often complacent and carefree America, situated chaos in his own backyard, in Ripon, Wisconsin. The result is a large drawing of a suburban yard filled with puddles of overweight and underdressed slobs fucking, eating and laying about. The clusters of flesh and debased activity call to mind paintings by Brueghel, the Flemish Renaissance master of the carnival.

“The Neighborhood” also came to look a lot like a free-love commune, much like the one founded in the mid-nineteenth century in Ripon, Wisconsin based on the tenets of Charles Fourier’s utopian manifestoes. It seems that the type of chaos Troy wished to impose as a lesson on the Ripon citizens was already part of their heritage.

Fourier, a French philosopher active in the early nineteenth-century, had a total vision of human history. He saw a future where humans could grow tails. It is purported that he coined the term “feminism,” but he also promoted sodomy. Perhaps it was ultimately his theory of a work ethic infused with excessive leisure that prompted followers to form communes in many American cities, including one in Ripon, and one in New England frequented by Nathaniel Hawthorne. Fourier’s popularity waned as industriousness became the norm in America, but as late as the mid-1940s, one century after Fourier’s writings came and went, André Breton, the father of surrealism, wrote a long-form poem in honor of him. “Let them say you cherished fond illusions,” writes Breton, seeing in Fourier a fellow seeker of the wide-open mind.

Like a conspiracy theory, the associations between the Ripon commune and Fourier’s visionary-bordering-on-insane social treatises grew fast and deep. Troy teamed up with artist Knut Hybinette to explore the underbelly of Fourier’s ideals, which soon ballooned to represent the current state of affairs. Troy and Knut refer to sex, drugs and rock ‘n’ roll as today’s overstuffed ideal. They see Fourier as a symbol of a cyclical movement in a society where we strive for perfection and yet are constantly misled by illusion—where entertainment is often mistaken for depth of personality.

And yet, escapism is still so attractive. One of the major pieces of output from their research is a multi-player immersive video game. Characters are dropped into a desolate world overrun with marijuana plants and vacant buildings. As in any video game where you wield a gun, there are others out to kill you and the goal is to survive. Knut and Troy explain, though, that the player is not the hero of the game, but merely an extra. Chances are you will die rather quickly once disaster strikes. Sorry, you don’t have any super-powers.

Another exhibition, “Slightly Unbalanced,” similarly grapples with madness-as-entertainment. Included are many internationally well-known artists, although their manias are slight in comparison to Fourier. Instead, we get a sane person’s idea of what it might be like to be unbalanced. There’s the typically bland experience of depression (Sophie Calle, Carrie Leibowitz, David Shrigley), worry (Tony Oursler, Bruce Nauman, Dave McKenzie) and general whining—“I want a special projects room at MoMA!” cries a wigged character in Alex Bag’s video, “The Van.” A large amount of crazy-person scribbling and obsessive record-keeping abounds in sculptures, paintings and drawings.

Lacking from the show is any real sense of danger, perversion or revelation of the dark side of the mind. Greeting viewers at the front of the show are two portraits of Cindy Sherman in her usual garb. In wigs and cakey makeup Sherman becomes spokesperson for fictive insanity. How do visceral and jolting nuggets of filth, contradiction and pain find their way from the artist’s mind to canvas? What happens when an artist listens and focuses their dementia? Go ask Fourier, for none of these hypochondriacs really know.