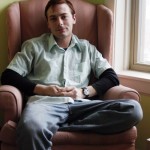 While most artists charge an arm and a leg for their original artworks, Chicago-based artist Peter Hoffman has found a method to reach the masses for free. Titled “Post-Paintings,” Hoffman requires the art collector to fill out a checklist with statements like “I am afraid of color” and “Everything is not art.” Hoffman receives the application and paints a 9”x12” oil on canvas picture and sends it back to them. These recipients recently sent back their altruistic paintings to Hoffman so they could be displayed at Mini Dutch Gallery.

Where did you get the idea for this project?

It’s a combination of a few consistent interests of mine: doing small, “study”-type paintings to work through ideas fairly quickly, and a love of letters, packages and personalized correspondence. I began this project in 2006 after spending part of the summer painting in France and keeping in touch with Chicago people with painted postcards. There is something I really like about making things for people and then sending it through the possibilities of being lost or damaged or crunched. If it makes it, it’s stronger.

What is the turnaround in receiving an application, doing the painting and then sending it back?

Right now I’m working on paintings that I received applications for about ten months ago. Some paintings I’m satisfied with after a week, others a month or more. It also depends if I’m working on other projects at the same time. I don’t feel guilty about taking a long time. I try and let people know where they are in the order of things, that it may be awhile, but it’s not really a commission or a request project. I’m just making paintings that have meaning for me at the time and sending them off.

Many artists check that they are afraid of color. With a certain type of painting, color really makes people uncomfortable, or at least self-conscious. Trying to talk about visual experiences or something as simple and old as colors can make people feel like they never learned enough or will never know enough. Color is always new, always confusing.

Have you ever done a post-painting and wanted to keep it just for yourself?

No, not really. It’s nice to see a lot of these paintings again and especially in relation to everything else, but when I make these, I have it in mind that as soon as it’s dry, it’s being mailed out.

Will you continue to do the post-paintings for a while?

The project will keep going as long as I keep getting applications. If the applications stop, I’ll probably still make paintings in the same format just because it’s become a regular part of my routine. If my apartment gets bad, maybe I’ll start looking up addresses to movie stars. (Garin Pirnia)