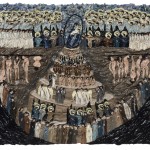 From her travels in Ethiopia my friend acquired a pocket-sized Christian icon, and she has gifted this to me. It is square-shaped and has carved wooden doors hinged on either side; these open to reveal painted devotional scenes of the Madonna and Child enthroned and a calm-faced crucified Christ. Saints and angels flank both scenes in the traditional style. I will not worship it, but can only place it alongside my Dia de los Muertos paraphernalia and ninety-nine-cent votive saint candles. In my possession, the holy aspect of a sacred object is drained, yet there is still so much left in it to appreciate. There’s the mathematic symmetry of the poses and gestures. An over-stylized drapery fold or a grotesquely mannish Christ baby rendered in familiar gold and blue can prompt an aesthetic devotion not unlike the faith it depicts.

Artist Jeni Spota’s religious-inspired paintings are effective in the same way: they use religion as a vehicle to express ideas extraneous to pure faith. Each painting is set in a valley and centered on the figure of crucified Christ who is surrounded by a massive audience, topped off with Madonna above and a chorus of angels. Like a rule, the scene is always the same, and it varies only slightly, such as the amassing of sinners in Hell or Simon Rodia’s Watts Towers (a perplexing addition). The basic scene or groundwork culls from a sequence in Pasolini’s 1971 film “The Decameron” in which a pupil of the great proto-Renaissance painter Giotto dreams of a perfect composition for his fresco. This scene, and Pasolini’s whole film, is a re-telling of a fourteenth-century text by Boccaccio that describes daily life in Italy during the Renaissance period. To see one of Spota’s paintings, each titled “Giotto’s Dream,” is also to see a film still from Pasolini, which is also to see Boccaccio’s text, which is also to see a portion of the life of Giotto, and then sin and salvation. To see Christianity via Spota’s paintings is to see a shapely myth that has been smoothed by the many hands that passed it through the centuries.

University of Chicago professor W.J.T. Mitchell recently published a book about how pictures, especially religious icons, create reciprocal desire between viewer and picture. Mitchell writes that icons prompt viewers to kiss them, and kissing is just one small step away from eating. Spota’s smallish paintings have been described as “caked” because she uses thick wads of oil-paint-like icing. “Spota paints like a cake decorator,” writes another critic. It’s a fine thing to have fun applying paint in this way, but what of the subject matter beneath the confection? I love to think about Christ rendered as a cake decoration in opposition to the sober wafer form he takes during communion, and surely food plays a huge part in religious festivities, but there’s also something strange about the total aestheticization of God without recompense to inner spirituality. It’s not atheistic but rather fetishistic. Traditionally, the image of God is supposed to move the viewer into religious epiphany, or beyond the world of images. Spota’s images of the crucifixion, like Giotto’s dream of the religious scene, locate holiness in good composition. Those who use images for religious purposes may not require the artist herself to be religious; it’s enough that she knows how to divine form from material.

Artist Andy Roche also questions the relationship between religion and its mode of delivery. “Black Iron Vatican,” the title of Roche’s exhibition, conjures death metal’s conversion of crucifixes, religious pageantry and paraphernalia to a total aesthetic. Sweaty crowds of long-haired teenagers could be mistaken for a tear-stained, testifying mass; music videos could be televangelical sermons. Roche further compounds the similarities by creating bedroom posters of imagery taken from hand-raising believers captured through the fuzz of a TV screen. Some of these posters are hung from metal rods in retail-style slats.

While it’s certainly true that a teenager can buy his or her rebel uniform off the rack from Hot Topic, Roche does not only point to the wholesale commodification of this lifestyle. The video installation “Tetedemort” shows a Passion play in some rural woods interspersed with footage of grave-markers. Filmed with Super 8 and a 1970s-style rock soundtrack, the video expertly re-enacts a vintage feeling. Harolding with Roche, the viewer is treated to an insider’s peek at theatrical death (the Passion play) and a cemetery like an old man’s mouth, filled with nubby-toothed graves. In another video we find Roche performing a Pre-Raphaelite-like new-age bit, screeching en plein air. As if magnifying the sublimated paganism within mainstream religious culture, Roche constructs the stance of the typical adolescent outsider. It’s sad to think that such fervor smoothes over as adulthood begins, but if it doesn’t, it turns the adult into a fundamentalist.