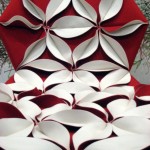 In an interview he gave to the New York Herald Tribune in the summer of 1959, Mies van der Rohe said two things history will likely never forget. “Less is more” and “God is in the details.” When heard in the context of Mies’ austere, stripped-down glass-and-steel structures, these words are linked to precision and streamlined form—the Bauhaus philosophy of pure functionality. But what happens when Mies’ words are set in dialogue with contemporary design? What if his “less” is a series of perforations in a structure; what if the details are flowers, curlicues and flourishes?

“Figuration in Contemporary Design,” curated by Joe Rosa at The Art Institute of Chicago, sheds some light—through a number of little holes—on the use of ornamentation in cutting-edge design and architecture. Displayed in AIC’s architecture horseshoe gallery, an intimate, curved space Rosa charmingly describes as a “necklace” off which works can be hung, the show presents the work of twenty-eight studios, architects and designers working today. New technologies have enabled better digital imaging, fundamentally changing the process of the conception of projects, and new fabrication techniques allow these digital visions to literally get off the ground. Rosa sees the represented works, which possess certain formal concerns that make the show at least partially cohesive, as “showing shift” and moving within a loose narrative, although a different phrasing of these formal concerns might be “Tattooing, Perforating and Fritting,” physical processes that recur numerous times across all the pieces on display.

In 2001, Rosa curated a show at the Heinz Architectural Center at the Carnegie Museum of Art called “Folds, Blobs + Boxes,” which looked at the way the standard unit of traditional architectural space, the box, has recently been changing form: folding in on itself, doubling, collapsing. The box’s mutations might reflect transformations in the human condition, fast-changing identities co-existing in the folds between numerous realities. In the “Figuration” show, Rosa has placed emphasis less on interior space than on the surface, the subject of much art that is called “Postmodern.” Rosa conspicuously never uses that term—he’s more interested in the specifics of technique—but it’s through an attention to surface that the work shown here most clearly breaks with its Minimalist past. With the exception of a few pieces, the emphasis is rarely on volume or space.

The show’s numerous surfaces each perform slightly different functions, presenting divergent ideological aims and conceived for different sites, running the gamut from public institutions to intensely private residences designed for individuals with a fear of, for example, West Nile virus. All of these surfaces, defined by the processes performed upon them and inscribed into them, possess certain functionality. Herzog and de Meuron’s Eberswalde Library uses a technique called “sgraffitto” to literally engrave into its exterior a kind of film archive of European history; 2×4’s way-finding wall adhesions for the interior of Rem Koolhaas’ IIT building in Chicago direct the visitor through the facilities; Ronan and Erwan Bouroullec’s “Algue” features a modular surface arranged by the buyer into new organic patterns; Demakersvan’s “Lace Fence” transforms the urban environment of limited-access and private spaces into prettier, more palatable zones.

The obsession with surface begs questions concerning deeper function. What, besides new industrial tools, is driving this return to ornamentation? Rosa agrees with my suggestion that it has something do with the current over-emphasis on productivity and performance. “Our culture has gotten to such a saturation point of analysis and productivity that there’s nothing left to chance and random thinking or just discovering beauty that hasn’t been highly rationalized,” he explains. In fact, for Rosa, the show began as a meditation on the appearance of flowers in contemporary aesthetics. “It’s antithetical to the modernist way of thinking. This is exactly what they <I>hated</I>. So why is it being embraced?”

Is the flower, then, a new political icon, signifying an urge to move into a changed space where there’s more time to think, less work, more nature, more honest play? The pink, curved, perforated walls of Kivi Sotamaa’s “Flowers” playground proposal for P.S.1’s annual Young Architects Project suggest a yes. This yes, however, is still struggling to free its voice from a Minimalist past. Many of the surfaces in this show about surfaces still rely on Minimalist principles of seriality, repetition and the grid, and, by default, on the factory production that make them possible. Utopian dreams of open dialogue and freedom must carve out a viable space for their realization. Aranda/Lasch’s appealing “Log Cabin” prompts the viewer to think about the pace of contemporary society: Whatever happened to the log cabin, symbol of the American wilderness and the solitude of the woods? What if we returned to building unique and inviting structures, forfeiting our obsession with repetitive condos and subdivisions? Wouldn’t it be nice to get away for a while?