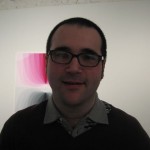 Eric Lebofsky is becoming a bit of a fixture in Chicago. If you’ve missed his shows of drawing, painting and recent sculpture, you might have seen his rock collaboration with Matt Espy, Avagami, play at local venues. With last summer’s release of “Metagami” on Lens Records the group’s following has been growing. But Lebofsky doesn’t stop making art; rather, he channels the energy behind Avagami into his art. Inspired by the physicality of Avagami’s performances, he returned to something that he hadn’t tried in a decade—sculpture. The result, now on view at Western Exhibitions, is a characteristically quirky mix of imagery, with all pieces roughly “animal sized.” These charming and colorful wooden sculptures hark back to Lebofsky’s narrative-based drawings such as 2005’s “Things to do in an Ice Age,” which includes directives like “give your attack dog a Mastadon bone” and “finish Camus,” or his poster series of portraits of his favorite books, “Chronicles of Misguided Education.”

Eric Lebofsky’s signature wry wit permeates his triple threat of artistic production. Each wing of Lebofsky’s attack has its own persona, as well. This becomes clear when viewing his sculptures such as “Marketwatch,” a hip-height piece with ascending green bars and descending red bars that alternately recalls “how-to-beat-the-stock-market” infomercials and old-school Nintendo graphics. Lebofsky tells the story of the desired effect this way: “Sitting on the sofa the other day, I had this epiphany where you come into a room and there’s an interaction between these pieces that are related to physical things like the size of animals. But together they create, through their different sizes and placement, a total visual and content synergy, a kind of eye-burn. You’d not be sure what you’re seeing and then all of the sudden it locks into place.”

The disparate sculptural objects somehow co-habit the matrix of associations in Lebofsky’s mind. Whether it’s “Otto,” a quasi-portrait of his bichon-poodle mix that has two large pink phalli emanating from both ends, or “Distortion,” a crayon box-like amplifier cabinet, the connections are strangely recognizable. Lebofsky again: “They are all related, but together they form a family, taken out of the realm of the narrative and put into the realm of the body. The same way as a family cohabits a space.” What about all of the facets cohabiting within Eric Lebofsky’s art practice? It’s clear they’re a family, too. (Dan Gunn)