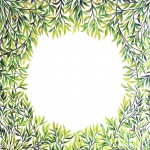 There’s an age-old sentiment that a communion with nature nourishes the body and mind. Looking out my frost-covered windows and struggling to keep my houseplants alive this winter, I marvel at the persistence of this attractive myth: it just seems so plainly, basically true. Yet, living in the city we are reduced to buying “organic” canned vegetables and tending our potted plants. Nature never seemed so far away. A good measure of this distance is how our artists depict nature. Do they find themselves in it? Or is it an abstraction?

Beards are back in style, proclaimed a Chicago Tribune article last week. It’s true, but it’s not merely an assertion of fashionable masculinity. No, seeing a bearded man is like seeing a face sticking through a bush. Ready-to-wear wilderness highlights man’s ability to turn to naturalism with ease, but also, strangely, the well-maintained beard is a sign of class and civility. See, for example, an 1867 portrait of the artist Manet as pictured by his friend Latour in The Art Institute’s collection. Manet sports full facial growth and a top hat, cane, vest and tie. This gentleman is a monkey in a suit. His likeness has been re-painted by artist Howard Fonda and is exhibited alongside Fonda’s other paintings that re-work the idea of nature.

Beards feature prominently in the paintings by Fonda, including bearded self-portraits and the dignified beard of the philosopher, here represented as a sculptural bust lying as if toppled on the forest floor. These trimmed beards appear among Fonda’s other canvases of precisely ordered nature. In one picture, twigs and branches, barren of their greens, are abstracted into ninety-degree angles. All lined up, they take on the appearance of a pattern. Another picture depicts a manicured opening in a screen of leaves, like a halo for Pan. One can well imagine Fonda-the-mystic, somewhere betwixt the bonsai-clipper and the French gardener, divining meaning from his plants.

Navajo textile patterns also provide Fonda with a big dose of inspiration. These designs are traditionally simplified, groomed and abstracted natural forms woven into colorful geometries such as stripes or zigzags. The rugs could easily be mistaken for spiritual or ceremonial devices, yet most were always used by the Navajos merely as common clothing or for warmth. Fonda mimics some of these patterns in his paintings. In one, he lightly inscribes the surface with the phrase, “Self indulgent search for meaning.” Fonda’s paintings describe the search for a mystical formula—in nature and in Native Americans. The weight of so much metaphor on a leaf or branch causes it to droop. If, as Fonda writes, his process of discovery is self-indulgent, then that’s hardly a surprise coming from a bearded idolizer of Manet. Yet it’s not to a fault that his paintings are overburdened with despondency; that’s simply the price of failed alchemy.

Although based in Chicago, Joseph Noderer mostly paints his native setting of western Pennsylvania. There, small, wooden homes sit amid dark, lumbering trees. These are painted with the same calm plainness that Edward Hopper approached his portraits of houses in the Northeast, though Noderer’s rural suburbia is charmingly homely. Trained in several art schools, he paints like a folk artist so that his forms (mostly homes), not correctly proportioned and with fudged perspective, exude a lot of personality, probably much like the characters who live in them. One can imagine hermetic woodsmen, perhaps, or grandmas and ghosts living a quiet life in the countryside.

Artist Molly Schafer hopes to re-find herself in nature. In summer she will venture out to Assateague Island off the coast of Virginia, renowned for its feral horses. Schafer will take camp there, build a wigwam-style structure, sleep on caribou hides and attempt to become feral herself. In order to fund the expedition, she is selling her drawings, which likewise consider a wilderness inside us that exists but must be sought. Often, she speaks about fantastical creatures, and as if by magic, drawing them brings them into her possession. The drawings recall some distant memory, conjuring primitive peoples and life in the prehistory. The voyage will be the fulfillment of the drawings. How rare to be able to live one’s art, but what sort of sign is it that she must finally leave the city to do so?