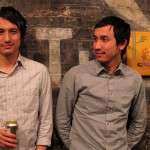 It’s Leap Night at Wicker Park’s Green Lantern gallery and twin brothers Andy and Ben Kehoe are celebrating not only the opening of their first joint exhibit together, but their first show in Chicago. The High Life flows and so does the room full of friends and art lovers interested in the burgeoning talent of the twins’ new paintings. Titled “The Safest Place in the World,” the name conjures a bit of irony. According to them, the safest place may be a fallow field seething with marauding Crusaders, gi-normous hairy monsters and personified birds and sheep inflicting acts of violence on others. The violence juxtaposes itself with insidious, intrepid and droll images.

The guys traveled to Chicago from their hometown of Pittsburgh, a city better known for sports teams than art. Since graduating college a few years ago, they’ve shown their paintings in group shows in L.A. and New York and in their hometown. Both of them are also illustrators. Ben’s comics appear in anthologies and Andy’s in The New York Times Op-Ed section. Ben injects acrylic and gouache on panel while Andy blends acrylic and oil, giving his work a richer sheen. Motifs of brownish fields signifying death, leafless trees and archetypes of boozing shepherds, gruesome crows, scoundrels and masked killers licking ice cream narrate their action-orientated paintings.

In Ben’s works, impalement and decapitation are reoccurring themes. Tree branches embattle people, cutting through their limbs. In “Accidental Transference of Death,” a man tries to hang himself from a tree only to have the branch break and impale his lady on the way down. “Severed Head and Ghost Head Make Uncomfortable Eye Contact” epitomizes its hilarious title combining material and spiritual worlds. In one of Ben’s earlier works, “Gut vs. Heart,” he explores friend versus foe as two Crusaders shake hands with one holding a knife behind his back as the other grips a bouquet of flowers. (Sometimes you can’t trust your friends.) Andy’s scenarios encompass despair with a slight hallucination of hope. With “Feeding Life,” crisp, red autumnal leaves tumble onto the ground where a devil-like creature lurks six feet under. “Optimism Rises from the Dusky Weald” contrasts the former with a birdman levitating above a forest of trees.

The characters in these paintings metaphorically search for endless truth and quietude while being subjected to impending doom. As desecration unfurls, the Kehoe brothers smirk at the danger ahead. (Garin Pirnia)