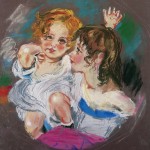 By Jason Foumberg and Kristin Brockman

A Karen Kilimnik painting retrospective at the Museum of Contemporary Art inspired the following critical dialogue:

KB: A dead squirrel is a perfectly lovely thing. What kinds of things do you like to look at, anyways?

JF: I like looking at the people in the galleries.

JF: Everyone was checking each other out and it wasn’t even First Friday. Did you notice that?

KB: What, no! I never look at other people in public.

JF: Wait, you never look at people in public?!

KB: No, it’s weird, but I tend to pretty much ignore everyone. Am I a freak?

JF: But you feel OK staring at people in pictures?

KB: Of course. I love looking at pictures of people and imagining what goes on in their lives.

JF: Everyone here looks kind of blank. But that has never stopped me from staring at them. I look at pictures and people and I think if they are good for looking then they are good for, you know, fucking. Fucking good looking: isn’t that all we ask for in a picture?

KB: Sometimes you like to look at something ‘cause you can’t look away, like a car-wreck of a person. Britney, you know? Not everything is about sex; sometimes it is about using other people to feel better about yourself. ‘Cause all I want to do when I look at people is judge them.

JF: Once you asked me, “What if things are just what they look like?”

KB: You never answered me.

JF: I want decorative wallpapers and comfortable couches, flower arrangements and lakeside manors. I want glamour and fantasy. That’s realism to me. But is the dead squirrel equal to these things? Or is it the control against which to measure our sugary desires?

KB: The squirrel is just a part of all this beautiful stuff. It reminds me of how when you see a rich or famous person wrapped in expensive clothing and furs, they must have forgotten that once upon a time all that was…a dead animal. (Wait, is that too PETA of me to say?) What I mean is that there is all this luxury and beauty, but there’s also something pretty gross that is underneath it all.

JF: There’s no denying that a squirrel-fur coat is also a bunch of dead squirrels. Death is so chic right now. Gothic romanticism is the new black. There’s no underbelly; the dark underbelly is the surface. I don’t see anything except surfaces here. Hairdos, snowfalls, rosy cheeks and pretty pastels. Gold, pearls, glitter. There’s almost nothing to make of it except the things themselves.

KB: Who doesn’t like beauty? The pictures make me feel like I am part of it all…like I was inside the orbit of all these stars and pretty things. It was like I was a character in the play. You know what I mean? My hair was done beautifully and my cheeks were rosy.

JF: Were you ever a ballerina like the ones in these pictures?

KB: I did do ballet for something like a million years. I remember the costumes and outfits, that was my favorite part of it all. It is probably why I gave the thing up once they stopped dressing us up as kittens and bunnies. There were never any sets in our ballets, but I remember going to the ballet and seeing all of the beautiful ballerinas within what felt like a different reality on-stage. I remember thinking I wanted life to be like that when I grew up. I still have very strong memories of that feeling whenever I see a ballet. I always wanted to be a sugarplum fairy.

JF: You are a sugarplum fairy if you want to be one.