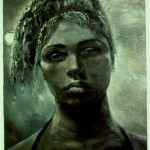 Chuck Walker is amazingly prolific, and he’s been painting and drawing for thirty-five years. When you visit his studio he shows you an inventory of literally hundreds and hundreds of canvases—most huge, five-by-seven feet is common for him, some run nine-by-eight feet—and just when you think your senses can’t take any more he starts on his drawings, stacks and piles of drawings, and finally he bludgeons you with watercolors.

So the Hyde Park Art Center renders a great service by holding a mid-career retrospective of his work curated by art critic and SAIC instructor Margaret Hawkins, a longtime Walker booster. Selecting twenty-four canvases from the available cornucopia must have been painful, and Hawkins opted to focus on Walker’s most elusive subjects, titling the exhibition “Through a Glass Darkly.” All but a handful of the works she chose picture women who are not looking at us: one with her back to us peers into a dark closet, several are sleeping, and another seems to be trying to climb out of a garret window while a man’s hand on her calf holds her back. The environments are generally urban and squalid—think Bukowski.

Three effective pieces violate the pattern. One is a man/puppet on (literally) a string: a fully formed face and, under a harlequin-like blouse, a muscled upper chest—but by the time you get to his forearms and belly the clothes hang empty, and his detached hands dangle on strings. Another is a stripper looking out from the canvas, almost aggressively not engaging the viewer, her expression mournful and so, so bored.

Both of these are very painterly examples of Walker’s technical mastery. But he’s confident enough to cheat: another stripper is less fully developed, lewd in the garish lighting of a strip club, rendered in gaudy Toulouse-Lautrec colors, denied dimensionality.

Walker’s drawings amaze. One shows a man’s bare back and the side of a woman leaning into him, conveying raw sexuality with just a few lines of ink. A display case of about fifty sketchbooks remains, of course, locked, tempting, teasing—much like Walker’s paintings. Burt Michaels)