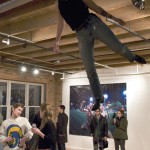 It’s well understood that a good joke needn’t be explained; its punch is packed in the delivery. Building on that, Ross Moreno tells purposefully unfunny jokes—the type that a child might enjoy but are also so deeply unfunny they spark profound bafflement—if you can see past your own wincing. On this particular evening Moreno was telling pirate jokes like it was a kid’s birthday party, but he was also naked, painted green and wearing skimpy thong underwear with a parrot-shaped codpiece, sort oflike a penis puppet. After realizing that Moreno would deliver nothing more than a few lame puns and his grotesque appearance, the crowd began again to take interest in chatter and beer. Moreno, on stilts, hobbled up to the folks, his puppet bulge bouncing at face level, arrrrghed liked a pirate and asked, “What do you call a pirate missing an eye?” Answer: a prate. The pirate marionette dancing at his stilt feet proved a feeble respite from the awkwardness, embarrassment, pity and discomfort that washed over the crowd. Moreno was entertaining because he failed so greatly at being, well, entertaining. 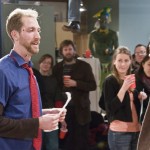 By the time Moreno’s green-painted butt became a nuisance to the art opening/party atmosphere, Justin Cooper pulled out two suitcases, one stuffed with fellow artist Benjamin Bellas and the other with a hundred pounds of glitter confetti. Cooper and Bellas greeted their guests and welcomed them to sit in metal folding chairs that were thrown unwelcomingly into a clashing heap. Cooper then spontaneously fell to the floor and flopped like a fish. Bellas, with handfuls of confetti drawn from deep within his pockets, sprinkled the stuff on the seizuring Cooper as if it were pixie dust. “It’s okay,” he cooed convincingly. Soon enough, it was okay; Cooper rose, and “It’s okay” became a mantra, simultaneously pacifying the violent mime act and uplifting the party spirits once again.

All the while Noelle Allen hung from a metal cord on the ceiling, balanced piñata-like in mid-air by the weight of the keg on the other side of the pulley. Her height, determined by the draining weight of the keg, was directly tied to the crowd’s high. Allen later explained her performance as a gift, pointing to the free beer. Floating above the crowd like a surreal specter, she was also the proud matron of the evening’s energy. She slowly descended and came floor-bound once the crowd was well-oiled to receive the rest of the night’s offerings, including Cooper’s inane recitations, some wrestling and an act involving the dropping of oversize grapefruits blindly from a third-story window.

This multi-ring circus performance was an installment in the ongoing experiment by a collective of seven artists calling themselves I.E. Fresh from a two-week residency, exhibition and performance in Hong Kong, the four Chicago-based members regrouped here for a translation of their experience abroad. The excursion proved mostly to be an adventure in shopping in Hong Kong’s hypertrophied markets. Their current exhibit in Chicago presents varying attempts to overcome the sense of foreignness felt in China’s megalopolis. The results are sometimes sweetly poetic, such as Benjamin Bellas’ chain of electrical adapters and nightlight referencing the distance between him and his wife while away, and how he longed to connect with her. Other works often parody the misalignment of cultures by introducing new relationships to the objects found in the markets. A dried shark fin, standing in for the millions eaten by the bowlful, is paired with a cheapy JAWS sign; an ornate black glass chandelier, smashed at the Hong Kong performance, is here reproduced in pieces; a carved ivory Buddha statuette is seen in Noelle Allen’s vagina through an X-Ray—apparently they are readily available and cheap in Hong Kong.

These parodies, including the improv performances, always seem to involve a small amount of danger, leaving one to ask why would Allen endure hours of hanging from the ceiling. Why would Ross Moreno humiliate himself? Why would these artists put themselves out there, risk (and often achieve) failure, usually in front of an audience? Why court derision? As if enlarging and comfortably inhabiting the unfulfillment that trickles through everyone’s life at some point, the collective bears the burden. Common insecurities and failures are given voice and strut before our eyes. Aspiration, ambition, dreams are stripped and revealed as excess nonsense in a fancy dress. This act couldn’t find a better home than in front of the I-don’t-know-what-to-do-with-my-life-even-though-I-went-to-college generation. Maybe really it is okay, as Bellas and Cooper shouted. Maybe there is room for a hundred pounds of multi-colored glitter confetti in our lives.