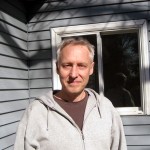 “Piove,” a voice says to me from the screen. The shot changes to rain pouring down on a corner of a green field somewhere on the edge of Rome. “It’s raining,” the yellow subtitle claims. I can see quite clearly that it’s raining, but raining is not the same as “piove,” and raining is not the same as the words “it is raining.” Further, this rain is not Chicago rain, but Italian rain, which makes it mysterious, foreign and captivating—rain requiring translation. “Piove” isn’t a redundancy but a passage into another place, and I’m being led through.

John Arndt’s “Italian for Travelers” (2007) is full of such gateways, recesses and passageways leading to intriguing corners of out-of-the-way Roman neighborhoods. Language becomes an everyday space one can pass through. “This is really an odd set of phrases,” Arndt says, speaking of the Italian phrasebooks he used to make the video’s script. “How would you use some of this stuff? How did this publisher choose these particular phrases?” Arndt’s video interrogates foreign words, making poignant and surprising statements. “This is for you,” the yellow subtitles read as a glowing image of the moon fills the screen. “Questo e per lei.”

Arndt remarks, “On one level, the video is about language, but then underneath that, I think it’s really about something more—what it means to be human, and how our everyday life reflects who we are, where we come from, where we’re headed…”

The moon hangs there, projected across the gallery. Is the moon something I could offer an Italian, were I to master a phrases handbook? Is Arndt offering me, and all other viewers, the moon? Isn’t this the sentiment of the Romantic painters who flocked to the Campagna Romana? Moments later, the moon disappears.

Though Arndt has an MFA, he is a self-taught audio and video-maker. Sound crept into his work only a few years ago, and “Italian for Travelers” is his second video. It’s a natural extension of his interests, he says. “I just tell people I’m a sculptor when I want to give the short answer. I probably do sculpture only about forty percent of the time.”

Arndt shot his first video, “Empire” (2006), with the thirty-second movie function of a digital still camera (pleasantly recalling a single Bolex wind-up). Its dozen or so mostly static shots capture inhospitable landscapes from Utah’s Salt Flats, taken while Arndt was at the Center for Land Use Interpretation’s Wendover Residency. Huge white missiles perch on their platforms; numbered targets stand in a row in the middle of “nowhere”; large cicadas scurry low across the ground. The images resonate with Rome’s outskirts, where land is put to unclear use and indecipherable graffiti cover the Claudian aqueduct. Strange sounds populate “Empire”’s landscapes, drawn from Arndt’s CD of field recordings made on the same trip. Clicks, whirrs, the delicate voices of birds, disco beats and the sounds of an intriguing place called “Montego Bay” populate the near-abstract landscapes.

“Variations on Aphonia,” Arndt’s first show at Rowland Contemporary in 2007, ran in the wide circles of conceptual composition and musique concrète that link sounds and objects. Much of the work in that show began with a piano Arndt single-handedly pushed home through neighborhood alleys and dismantled in his Forest Park basement, distilling it into a number of other…events. Its strings became “Four Thirty Three” (2007), à la John Cage, a tangled ball of potential sound resolving itself not only into silence, but into shape. But first, Arndt played the strings with an electric fan, a pencil and a sledgehammer, a composition repeated throughout the show’s duration. In the gallery’s center stood the tripartite “Within/Without” (2005), a clarinet, a mellophone and a trumpet, each encased in a block of concrete. These potential sounds were also about space. Arndt wanted to make a piece “where the absence was more powerful—the hole was more powerful than the outward shape. That became the center of attention, that mysterious space in there.”

Like his current show, which also presents strangely heartbreaking drawings of Italian Lost Dog posters, including one for an epileptic dog, “Variations on Aphonia”’s walls were punctuated with delicate, ethereal line drawings of dead plants in Arndt’s yard. Arndt was still thinking about negative space in the drawings. “They were supposed to be line studies—more about what wasn’t there than what was there. It’s a different type of silence, a visual silence.” The whole show was a kind of score—a surround almost-sound.

Arndt says that if anything ties his work together, it’s a sense of place, and how we inhabit it. He brings to this interest both a sculptor’s and a musician’s sense of physical surroundings. Displacement, heaviness, emptiness, silence—Arndt’s work is about the human as it lives, works, hits piano strings, makes missiles, tries to speak, hears birds. “Everything is very interesting,” the video’s subtitle claims over an image of bottles and soccer balls churning in the Tiber. “Tutto e cosi interesante.” I’m learning how I can put this phrase to use when I find myself someday in another place.