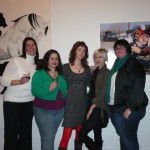 A hearty mass of art fans and critics sit in the back room of Medicine Park, a new apartment gallery run by Amy Cargill. Showing on a large white screen is a video shot from the perspective of a girl watching “Dawson’s Creek” in her room. The gallery is quiet, a low buzzing sound is audible, and it becomes clear that the girl is really enjoying the show. Within seconds two people from opposite ends of the room roughly whisper, “that’s the Hitachi magic wand!” The video—a five-minute short titled “Friday Night” by Stacia Yeapanis—is the last in a series of four videos shown that night for the opening reception of “Henbane: Dialectics of the Feminine Sublime,” a selection of mixed media projects conceived in tandem by artists Amber Hawk Swanson, Molly Schafer, Meg Leary, Stacia Yeapanis and Jenny Kendler.

Henbane, also known as “stinking nightshade,” is a semi-poisonous flower with psychoactive properties that was used in ancient times for magic potions. This is a fitting symbol. “The work is all about fantastical genres and mythical creatures,” Jenny Kendler says. “It is creatures referencing fairy tales and elements of sexual fantasy—and cultural expressions of fantasy.” Kendler’s work for the show includes terrariums encasing squishy female figures laid flat in fields of glowing mushrooms, all dissolving into nature.

The melding of fantasy, sexuality and brute female force is widely spread throughout the gallery. The largest wall in the room showcases a new mixed media drawing/painting by Schafer titled “Specter/Blood Wrath: When I Go, I’ll Take You With Me.” The piece shows a shadowy horse with pink feathers in its mane being menacingly approached by two black wolves. “Every creature in the piece is a ghost,” Schafer says. To the left of her painting, Schafer has installed a small golden monitor on top of a plastic ionic column. Viewers are invited to watch her video series “Centaurides” and listen to narration through a laurel-leaf crown headset. Next to Schafer’s piece hangs a photograph of Amber Swanson’s Real Doll, a sex doll created in her likeness, sitting in a folding chair at a tailgating party while saucer-eyed sports fans pose next to it.

As the night wears on, closer to the 11pm closing of the show, all present in the gallery huddle away from the cold of the main front doors, surrounded by images of sex and strength and otherworldliness. “This sort of really freaks me out,” one guy is heard saying to his friend while standing in front of Swanson’s Real Doll image. “Yeah, but it’s like you can’t turn away.” And really—isn’t that what magic is all about? (Kelly McClure)