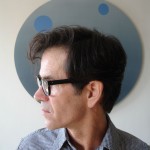 Sitting in Delilah’s on “Punk Rock Monday” drinking one-dollar American beers with a friend, I made mention of my upcoming interview with Chicago artist John Phillips. My friend’s face lit up in recognition and he said, “Yeah, I think I know that guy.” He told me that his roommate was acquainted with him and that Phillips is “really into punk rock.” At this, I grew quite enthusiastic and promised myself that I’d inquire about it forthright during our chat.

So I did. I asked Phillips what role, if any, did music play in his practice as a painter. He immediately corrected my assertion, that the medium held the capacity to affect the development of his work, and informed me that influence did not dictate the relationship between these two loves as much as his attitude towards them does. This attitude, one of pleasure, explains why Phillips chooses to listen to the music he enjoys. As the owner of a massive record collection, much of which consists of rare twentieth-century African-American music, taste has determined what he’s played in clubs as a DJ since the late seventies. And just as Phillips listens to what he likes, he paints what he likes. For this, he digs into massive crates of art history, indebted to artists such as Henri Matisse and Barnett Newman.

Implementing the art-historical lexicon of conceptual abstraction, Phillips’ language “engages on the level of slang.” This language, celebrating intense color and spatial relationships, in a tone of humor and fun, is quite serious. Though his work has pop sensibilities, he prefers to work the middle, not being too hip or too pious. Subsequently, painting becomes a “vehicle for a color experience,” while clearly and specifically referencing the history tied to it. There proves to be a constant tug of war between intelligence and indulgence for the artist, but despite whichever force prevails, the aim is to always make the viewer weak in the knees.

Phillips’ new work continues to challenge the serious issues of the painting tradition in a vernacular fashion. This discourse allows the viewer to partake in an engaging dialogue and furthermore makes the act of seeing just as valuable an experience as the act of conceptual art-making. Paintings are fields of fierce color and amorphous shape, hinting at the figure and embracing all possibilities of form. Phillips’ hard-edge, flat and matter-of-fact execution is careful. His tactile movements are slow, precise and detail-oriented and counterbalance the pure visual hedonism of his canvases. They’re smart and they’re satisfying, cerebral yet physical. And to put things into laymen’s terms, it’s as “if Disney was doing Mondrian.” (Karissa Lang)