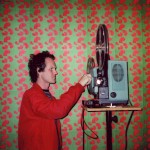 Ben Russell is a cinephile. For the time being the itinerant Russell has landed here in Chicago as a professor in the Moving Image program at UIC and curator of Gallery 400’s film-screening program. Russell has lived all over the United States, Australia and Suriname and toured through Europe with film and performance programs. To top it off he has just received a Guggenheim grant to travel to a South American jungle village to shoot an experimental documentary film. His film projects are as diverse as his curatorial endeavors and have included a 16mm flicker film featuring Richard Pryor, a documentary of modern-day trance rituals at noise shows and a remake of the 1895 film “Workers Leaving the Lumiere Factory” shot at a construction site in Dubai. He declares an “abiding interest in alternative approaches to documentary and ethnography” in his work despite the varied forms that his films take.

Russell’s curatorial machinations began in early 2003 when he opened the “Magic Lantern” in Providence where he had attended Brown University five years prior. Sensing that cutting-edge film was being drained by overly formalized academic models of presentation, he sought to create an inviting screening environment. “I wanted to bring joy and marvel and magic back to the work, and I quickly realized that I was much more interested in making connections between different kinds of films (experimental, documentary, amateur, etc.) than I was in presenting single-artist programs. To me, thematic programs like ‘The Gun Show’ or ‘The Animal Show, Part Two: Bats Vs. Cats’ offered audiences a way into the work without distilling it or dumbing it down.” The programs for Gallery 400 have followed Russell’s same model with an added attempt to complement the gallery’s current exhibition. In describing his approach to curating, Russell compares it to “making a really good mix-tape” in that he tries to “create enough of a range historically, materially and topically in my programs that the viewer isn’t exhausted by the end.”

This commitment to “other folks who are as geeked out about experimental film/video as I am” comes through in his programs. And with his involvement in supporting Nightingale, a new screening spot on Milwaukee Avenue, Chicago film buffs should be happy to have him here. “Chicago is a great place to be for cinema of all sorts, and it continues to get better and better.” (Dan Gunn)