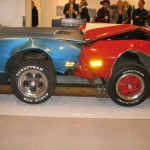 It’s too tempting to not report “overheard at the art fair.” In front of a painting by Neo Rauch, one shopper said to another, “The thing about art is you don’t have to like it.” You don’t even have to see it, either; just order it by name. “Names, names, names, darling!” (Okay, that one was from “Absolutely Fabulous,” but the sentiment holds.) For one whirlwind weekend we had to put our care for meaningful art practices on hold in the hope that Chicago could contribute to the still-thriving art market. Inviting investment collectors and shopaholics to Chicago was to be the nourishment that would sustain thoughtful and quietly productive practices for the rest of the year. The shop-‘til-you-drop atmosphere was further emphasized by the mall-like layout of the fair with rows of boutiques and impeccably dressed gallerinas. The art was almost as good as the people-watching.

Not everyone was distracted by price tags and designer-wear. Justin Polera, curator of last year’s Queer Fest Midwest, rushed me over to see a painting by Keith Haring of Mr. Softy, the 1980s brand icon for ice cream, here turned into a muscled gay icon in Haring’s hand. In the Next fair, artist John Parot swooned over works on paper by Jason Fox. Copies of Proximity, a new art-criticism magazine founded by Version Fest originators Ed and Rachel Marszewski, was being distributed freely despite us being, according to its editors, “in the throes of a recession.”

Printed to coincide with the fair weekend, Proximity highlights some of Chicago’s best alternative spaces such as the Suburban, Vonzweck and Deadtech. These are non-commercial art spaces that hardly have any relation to the huge art-fair commercial enterprise. Surprisingly, several of Chicago’s apartment galleries found their way into the fair, especially in the Goffo-curated arena, organized by Mike Andrews and Noah Singer of Imperfect Articles, the limited-edition artist t-shirt company. So, Old Gold, Green Lantern and Alogon Gallery, known for their usually experimental presentations of art and opening-night celebrations, looked like professional business ventures. Some of the strength of these spaces was drained by their lack of character. For instance, I’m used to Caroline Picard’s cats rubbing against my legs as I look at art in her apartment, and Old Gold’s artists seemed estranged without the wood-paneled basement. But the effort to mingle with the masses was well received. Exposure and accessibility was key for these spaces that don’t sit snugly in the usual gallery districts. Even ThreeWalls, the non-profit artist residency, was given a castoff stairwell space to feature an artist project. This refreshingly giving gesture by the fair’s organizers muted the pay-to-play scheme, even if only momentarily. Elizabeth Chodos called her space the coffee bean in the perfume shop, calming noses between wafts of scent.

Next door to the Goffo section was the Old Country bar, arguably my favorite place in the entire fair. This functioning temporary installation of a dive bar, provided by the Old Gold gallery owners, replicated a quintessential Chicago bar frequented by so many artists. With TV tuned to Nascar, lights dimmed, cheap beer and nachos, old wooden bar and booths, and plastic red-and-white gingham tablecloths, this could have been Inner Town Pub or Skylark. It was a great place to calm the eyes and engage in non-stressful conversation. It was easy to forget that you were in the midst of an art fair.

In the Next fair, the newest addition to the Artropolis conglomerate, small solo artist exhibitions broke up the pounding rhythm of the stalls, as did film screenings interspersed between the galleries. The solo shows, including some by Chicago artists Robert Davis and Michael Langlois, Matthew Girson and Terence Hannum, provided in-depth perspectives where we are otherwise often overloaded with too much to see.

Art about the environment and about war was present, but thankfully not in overkill. Large-format photography, conceptual practices, “unmonumental” sculpture, skulls and skeletons were in attendance en masse. Even Jonathan Schipper’s kinetic sculpture, presented by Pierogi gallery, of two hotrods smashing each other in tense slow-motion, seemed hedonistic even if it was titled, “The Slow and Inevitable Death of American Muscle.” Profound? Perhaps. Decadent? Delightfully so.

While Andy Warhol’s dollar sign still holds up as the dominant signifier for this type of event, Mark Wagner’s reconfigured collages of actual dollar bills, presented by Western Exhibitions, speak more to the creative depth that artists are willing to plunge into when interpreting the art/money relationship. Perhaps it is a flat relationship where desire is represented as that which will fulfill it (the Warholian scheme). But increasingly more artists and viewers are looking to reenergize the market, and their desires, with objects worthy of their wallets as well as their senses.