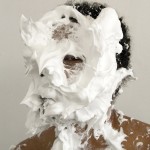 Is there a safe place to say the N-word? A new thematic group exhibition at the Renaissance Society pretends that the term can be used without consequence if uttered at a critical remove, or if it is a scholarly concern. That which otherwise has no place in print, on air, or on lips finds refuge when examined under the microscope of the art exhibition. The NAACP recently buried the N-word; this exhibition performs its autopsy. As if in a surgical theater, all parts, from civil rights to stereotypes, are splayed and labeled for inspection. Yet, if one were to open a body to go searching for “race,” you’d just end up making a mess. If one were to open up the culture and go looking for the same, as this exhibition does, you’d turn up with handfuls of gold chains, fists raised in anger and face paint. Here, race is a style. The art gallery is a safe place to say the N-word.

Patti Smith’s acrid punk song from 1978, “Rock ‘N’ Roll N***er,” appropriated the N-word and re-purposed it to connote someone who stood “outside of society,” her turn of phrase, aligning all outsiders—feminists, queers, weirdos and revolutionaries—on the same side of difference. So, Smith claimed Jesus Christ, Jackson Pollock “and grandma, too” under this rubric. For her, all these people could claim the N-word. Did it work? Did all outsiders band together, transcend racism and all other prejudices and gain equal rights? Well, yes and no. It depends who you ask; the N-word means something different to various groups. And it’s all in how you use it. The exhibition’s promotional poster, made by artist Carl Pope, declares, “The use of ‘a’ instead of ‘er’ changes everything!”

“Black Is, Black Ain’t” features some disturbing depictions without much context. We are expected to already know that Daniel Levinthal’s photographs of kitschy porcelain objects, reminiscent of the old Aunt Jemima or Uncle Ben brand icons, are bad news. Or that Mickalene Thomas’ photograph of a blaxploitation character—afro, hoop earrings, leopard print, Diana Ross album at her feet and a sultry, desirous look in her eye, tugs at the stereotype. Presumably these are on the “Black Ain’t” side of the equation, but the exhibit isn’t actually structured that way. Either these images are troubling reminders of whacked-out media representations, like pseudo-anthropological records, or they are ironic nods to their assimilation into the mainstream of what some call a Post-Black culture, where they are entertaining, not condescending. The Coon Chicken logo was given this sort of treatment in David Clowes’ “Ghost World,” and Quentin Tarantino’s “Jackie Brown” once and for all romanticized 1970s blaxploitation for popular consumption. So, what else can these figures contribute to the current dialog?

Andres Serrano’s portrait of a man in blackface, Mickalene Thomas’ portrait of a new Foxy Brown, Sze Lin Pang’s tarred-and-feathered Black Panther—these add up to a short history of how blackness is depicted in pictures. The images don’t perpetuate ugly stereotypes; rather they show that “blackness” has a changing face, from servile to strong. Missing from this scheme are Kerry James Marshall and Rashid Johnson, two artists whose work has been incessantly poised to speak about African-American life in Chicago.

William Pope L., who has had a lot of exposure in Chicago lately, shows three works here. A set of word-based drawings appear to get at the meat of an issue of “blackness.” “Black people are for rent,” proclaims one page. “Black people are pure tone,” says another. The message gets confusing when other colors are included, such as “Red people are boner cosmic” and “Green people are deciduous.” Also displayed around the gallery in various corners are small cones of white flour by Pope L. These fragile little pillars are held together only by their own friction, and some are cracking and spilled. Many of the terms of “blackness” in this show are phrased in the terms of “whiteness.” The two must simply coexist for any differences to become apparent.

In a terribly annoying film by Swedish artist Joanna Rytel, the narrator describes the pleasures and troubles of dating a Somalian man in Sweden. The sentiments are embarrassing: “When I’m licking him, I get nothing on my tongue. I think of him like a painted wall.” In a video by Thomas Johnson, the artist candidly explains that he is a massage therapist who likes to rub white women—they’re sexy—and black men—to find out “what all the hoopla is about.” Apparently he likes to inspect their skin. What these artists need isn’t a group exhibition, but group therapy. Their format, straight out of the YouTube confessional, plays out their insecurities for all to witness. Self-actualization through an imagined audience is this generation’s way of identity branding. It’s creepy, selfish and pretentious. If this is Post-Black, bring on the Neo-Black.