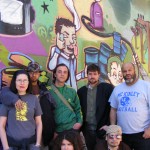 Artists and community organizers from Chicago’s Wicker Park and Bucktown neighborhoods are unhappy with a decision made by Alderman Manny Flores’ office to whitewash a mural. The painting currently covers half of the 2300 block of West Bloomingdale Avenue. The decision comes after complaints to the office from residents in the condominiums across the street that the mural is gang-related and too “urban.” The wall includes work by several artists who reside in the neighborhood and have been working there for years, such as Melon, Rome, Monstrochika, Denz, Cove and Shipwreck. Melon grew up in Bucktown just blocks from where the mural is located. Also included is the work of recognized artists from around the country, such as COPE2, KET, T-KID and Thor.

Initially, the residents were presented sketches for the wall, including work with a graffiti esthetic. The artists where given the green light to begin work on the wall and used their own money to being the project—$3,000 was originally pledged to the project by both the condo residents and the alderman’s personal funds. To date, the artists have received only one-third of the pledge.

Initial complaints arose from the residents over sexual content in the first pieces that went up. Community advocates Stephanie Garland, an artist, and Mike Bancroft, executive director of Co-op Image, quickly responded to the complaints and used their own money to cover up and revise the content of the wall per the demands of the residents. After this set of revisions, complaints from the residents that the work was gang graffiti persisted, although none of the mural portions contain any gang affiliation, imagery or references. Again, the artists submitted more sketches, but the residents were not happy with them and strongly voiced their desire to the alderman’s office to have the entire wall covered. According to the alderman’s office there are no specific plans for the future of the wall.

Once whitewashed, the wall will likely attract actual gang graffiti and less attractive tags. Some community members are also concerned that the wall will be given over to commercial interests, a situation that alderman Flores says will not happen, stating the wall is for “community use.” Indeed, Mike Bancroft feels Mr. Flores has supported the artists and community organizers by being an advocate for the mural project during meetings with the condo residents.

Although the wall will most likely be covered within the next week, community members are encouraged to express their opinion on the issue at “Ward Night” every Monday from 5pm to 8pm at 2058 North Western Avenue. (Sara McCool)