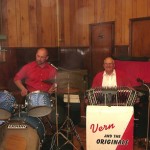 The six-lane Polish Falcon Bowl in Milwaukee, built in 1917, is one of the oldest bowling alleys in the country, and it is also the strange site of the second gathering of art-geeks for the Milwaukee International. The art fair is co-organized by a contingent of Milwaukee gallerists, artists and curators: brothers Scott Reeder and Tyson Reeder, and Elysia Bowery-Reeder, of the General Store, John Riepenhoff of the Green Gallery and Nicholas Frank of the defunct Hermetic Gallery. The fair draws like-minded galleries from around the world, such as Joey Chang Art from Beijing and Repuesto from San Juan, to co-mingle with larger, blue-chip galleries, including Gavin Brown’s Enterprise and Marianne Boesky from New York City. There is a large Chicago contingent, too, with Western Exhibitions, the Suburban, Rowley Kennerk, Shane Campbell and Golden Age artist’s bookshop in attendance. The fair’s five organizers list this assemblage of galleries as the fair’s strength. “Our priority is to gather a geographically diverse roster of excellent international art spaces. The mix is what’s important. Because the International is a balance of ideas and commerce, we want a range of different approaches to the economies of art.”

Shoehorned into the banquet hall of the Polish Falcons, a Polish-American fraternity and advocacy organization, the glistening white-walled booths look wildly out of place. 2006’s event was serenaded by Vern and the Originals, a local Milwaukee polka band. The event stirred up the aging Originals drummer’s passions so much that “after their set, he took the microphone and made a speech to the crowd, and wrapped up with ‘There’s hope for Milwaukee!'” It’s exactly this kind of contrast that makes the whole event both exciting and vital. The homey quality of the Falcon Bowl’s interior and its working-class inhabitants bring the absurdity of the art market to the fore. One of the fair’s organizers, Tyson Reeder, tells the story of one of his friends getting a hundred-dollar bill from a collector to park his car (there are no valets at the M.I.).

But to reduce the fair to an acronym like M.I. makes it sound too similar to other fairs. This is an art fair in form but not in kind. Generally, the fair format has two main strengths, consolidating the art market geographically to increase sales and serving as a meeting ground for artists, critics, curators and collectors. The Milwaukee International minimizes selling in favor of sociability.

Tyson Reeder again, “We decided that there were still some good things about the art-fair model, and used it as a basis to make a casual, human-scale event outside the institutional context.” The Milwaukee International has branched out from just the event in the Falcon Bowl to become a kind of “platform” for non-traditional art events like this winter’s Dark Fair in New York’s Swiss Institute. It’s exactly what it sounds like—an art fair with the lights off, but candles, flashlights and blacklights galore. The group is also in the planning stages of an Ice Fair in Ontario that would feature ice shanties as booths. All of this commotion serves to make the fair more interesting for its participants, both gallerist and browser alike.

As White Columns curator Matthew Higgs wrote in Artforum after attending the International in 2006, “What distinguished the whole affair was that selling art didn’t seem to be anyone’s primary—or possibly even secondary—concern. Instead, the weekend seemed—in the most straightforward yet profound sense—to be about hanging out.” This is an art fair where artists, not hedge-fund managers, feel comfortable. Other recent attempts to re-energize the art fair have come up short. Last month’s ambitious Next fair was swallowed by the Mart’s enormous and bland architecture and looked too conventional. The lone highlight of the fair was Old Gold’s “authentic” Chicago bar. It was a refreshing respite to aisle after aisle. But the Milwaukee International is the inverse of Next’s Old Gold bar room; it’s an art fair where you wouldn’t expect one. What you should expect is some music, some bowling and some art.