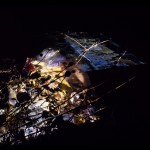 We live in a broken world in which even the most planned environments—museums—do not give us respite from cultural fragmentation and disconnection. At least that is what Tom Denlinger shows us in his garishly illuminated color photographs of detritus outside the hallowed halls that he has paired with artifacts within them, showing us that nothing can ever be pristine.

Defiantly challenging New Age dogmas of fundamental unity, Denlinger has the philosophical intention of reminding us that our experience proceeds from “multiple sources” that are never fully reconciled. His art is viscerally postmodern, rather than, as is often the case, rhetorical; he is convinced that we have bought into “narratives” imposed by specialized elites that take us away from our multifarious everyday experience and try to prod us to cover over a fundamentally disordered life.

Denlinger is a warm, tolerant and generous person who does not blame the museums for attempting to make life more comfortable for us than it actually is, yet he is ready to do his bit to subvert complacency. At 52 years old and ensconced at Lake Forest College, Denlinger could retreat to safety, but he is a member in good standing of the minority of conceptual photographers who have absorbed the postmodern dictum that we can never find a simple origin for our lives, but must accept, indeed affirm, if we can, that we are thrown into a vortex of unintelligible forces. Denlinger goes so far as to say that we are all “multiple personalities,” if we would only admit it, and that, if we would give ourselves the chance, we would understand that each one of us gives whatever unity to the whirl of things that we are capable of conferring.

Denlinger’s images, constructed in the studio, are relentlessly aggressive, joining photographs of gleaming waste and vegetation with illegible shots of art works against deep-black backgrounds, obliterating the boundaries that we draw between life and art. In his past series, Denlinger had preserved reference to objects that we could recognize, but now he has kicked over the traces and gives us studies of wild encroaching forces on denuded cultural pretensions. It looks like Denlinger has reached the terminus of his longstanding project and he agrees that it feels that way to him; yet he adds that he believes that every series is the last one along his line, until his will to subvert penetrates even more deeply. (Michael Weinstein)