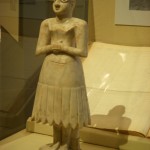 Mushin Hasan sits over a broken stone tablet, face sunk in his hands as a streak of light seeps past an emerald-tiled pillar. An employee at the Iraq National Museum, he surveys the dust and shredded documents around him on April 13, 2003, days after the U.S. invasion of Baghdad. The photographed despair is part of “Catastrophe! The Looting and Destruction of Iraq’s Past.” The University of Chicago Oriental Institute exhibit showcases the loss of culture and history during Operation Iraqi Freedom, when U.S. inaction and an illicit art trade allowed the looting of artifacts as old as civilization itself.

An apparently simple stone statue, four pieces of clay refuse and intricately designed “beads” are displayed alongside a picture of a ransacked Iraq National Museum. But “Catastrophe!” shows that these pieces of Mesopotamia’s cultural past, like many items looted in 2003, actually carry meaning and context that is easily lost amidst war and theft. The difference is that these particular items were excavated with permission of the Iraqi government in the 1930s.

“Our real motivation is to explain the importance of archaeological context, how that’s lost when looting displaces an artifact from its original surroundings and obscures its relationship to other objects,” says Geoff Emberling, museum director for the Oriental Institute.

A tan, gypsum statue of a person stands with hands folded and wide, almond-shaped eyes gazing upwards. Though more than 4,000 years old, the “perpetual adoration” effigy’s apparent awe reflects an ethos that continues in religion today. Archaeologists found it in a temple dedicated to Abu, the Sumerian god of vegetation and fertility. The cylindrical “beads” are quartz and stone seals, rolled over clay to mark documents and seal containers in some of the world’s first archives and warehouses. The four clay tablets are etched with wedge-shaped cuneiform, humanity’s first known writing system, to detail the duties of the Abilulu family. Four generations of men, from 2926 B.C.E to 1920 B.C.E., were field surveyors and administrators of a palace real-estate archive. It seems the bureaucratic ethic connects thousands of miles and years separating these ancient worldviews from our own.

Blame for the looting in Iraq is muddied between U.S. failure to protect artifacts, the looters themselves and the private art collectors and dealers who make the most profit. Emberling notes that a Mesopotamian lion statue sold last December nabbed $57 million at a Sotheby’s art auction in New York. “Catastrophe!” highlights U.S. negligence before and after the start of the

“I think that our inattention to the ongoing problem has the potential to be one of the long-lasting legacies of the U.S. invasion of Iraq,” says Emberling.

An exhibition poster describes how former director of the Iraq National Museum, Donny George, warned the U.S. State Department weeks in advance of the April invasion that antiquities would be vulnerable. Museum associates dutifully moved scores of ancient manuscripts and archives in underground bunkers before the world watched twenty-four-hour TV news coverage of thieves taking advantage of a freshly invaded Baghdad.

Former U.S. Defense Secretary Donald Rumsfeld said of the looting, “Democracy is messy. Stuff happens.” Anarchy is messy too. As U.S. neo-conservatives ironically rambled about the democratic rebuilding of Iraqi society, its very foundations were crumbling or being stolen. An exhibition photograph shows coalition forces casually bulldozing ancient ruins Samara in order to build a roadblock.

Many other archaeological sites are still in danger of being looted and destroyed by an ongoing insurgency, Emberling says. Much of the money made by looters is allegedly used to buy weapons. Building blocks of ancestral society become commodities for destruction.

“Catastrophe!” does display superficial attempts by U.S. forces to hinder the looting and trade of antiquities. On display are playing cards produced by the Department of Defense that give U.S. soldiers visuals of Iraqi artifacts that have been stolen. A U.S. military poster lists the “Top 30” stolen artifacts from the Iraq National Museum. An executive order prohibiting the import and destruction of Iraqi antiquities was amended into U.S. customs law on April 30, 2008.

But the Oriental Institute seeks to build on the often inadequate protection of antiquities, advocating U.S. ratification of the 1954 Hague Convention. To complement U.S. customs law’s ban on imports, the convention is an internationally binding ban on the export of antiquities from Iraq. It also requires parties such as the U.S. to work with Iraqi authorities to protect archaeological sites. Visitors to the exhibit can sign letters to Senators Barack Obama and Dick Durbin urging the U.S. Senate to ratify the 1954 Hague Convention.

“I understand why this might not be considered a high priority. We are concerned about the lives being lost every day,” Emberling says. “But as an archaeologist, I think it’s necessary to take a long view of history and realize how this will be a loss for generations to come. Protecting antiquities requires a relatively small effort.”