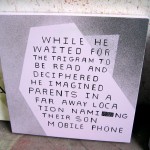 Last Saturday in the MCA’s 12×12 exhibition room, a boy began to prance around, chanting the phrase “Hibiscus and gravy! Hibiscus and gravy!” The boy’s annoyed mother led him out of the room. Surely there is something rather wonderful about an artist who can provoke a scene like this. Mark Booth’s text paintings and drawings seem slight and ephemeral, and they are, in a sense, recordings of fleeting thoughts that most people do not stop to record or even verbalize, unless they are children.

The works are the result of a kind of automatic writing, but they are not less beautiful for that: “toppled frozen trees / an owl made of delicate thoughts” is hand-lettered near some drawn marks that enact a sureness and fluidity of gesture. As Booth puts it, the phrases and sentences in his text painting are “simple structures that open up and reveal a world,” and each work contains “uneasy alliances” of ideas that construct tiny narratives.

The concern with language is not just intellectual faddishness—an early diagnosis with dyslexia led Booth to a relationship with language that he describes as oblique. Hints of alphabetic breakdown are everywhere—those crosshatched boxes with the height and width of a letter show up in many works. In one of the most successful pieces in the MCA show, Booth says he had made a mistake: “IT WAS A SOUND A MUSICAL SOUND THAT PRODUCED AN EMOTION WHICH ELUDUDED WORDS BUT COULD BE IMAGINED METAPHORICALLY.” He had not meant to spell “eluded” that way, but it has a marvelous effect in the way the word-mistake draws itself out, like a musical sound.

In fact, sound has been part of Booth’s artistic practice from his beginnings at the Rhode Island School of Design, where he received a BFA in printmaking in 1987. Later, at the School of the Art Institute, he worked with sound artist Lou Malozzi and others, and became active in the flourishing experimental-music scene here. He is now a member of the SAIC faculty in the Sound Department (as well as Painting and Drawing, and Liberal Arts and Writing.) He is also a longtime member of Tiny Hairs, an instrumental collective that explores minimalism, noise and pop. In a way parallel to his sound art, Booth’s poetry and text paintings and drawings are concerned with the materiality of language, and though he has been published in journals like Jubilat, he does not really fit in with the so-called language poets that are represented there. A certain childish abandon and delight in improvisation seems to set him apart from those mandarins who insist on the materiality of language but not much else. (David Mark Wise)

Mark Booth shows at the Museum of Contemporary Art, 220 East Chicago, through June 29.