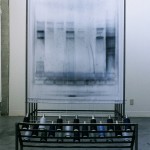 Putting the final changes on her installation, “Fingerprint DNA—A Portrait of an Arab-American Family,” at the International Museum of Surgical Science, Geraldine Ondrizek pushes a white curtain off a window-unit AC. She steps back, debating, then momentarily replaces the curtain before removing it again.

“The air is messing with my threads,” she explains, gesturing to the dozens of strings attached to the back wall. The fibrils dance in the air-conditioner’s breeze before lacing through multiple loom-like panels of silky fabric, connecting to blue, gray, green and black spools of thread. The fabric is dyed to recreate the gels produced by a DNA fingerprint—specifically, the fingerprints of her husband’s Arab family—and layered to showcase their similarities.

A graduate of Carnegie-Mellon University and a professor at Reed College, Ondrizek has consistently sought to create works that are not only aesthetically provoking, but that also resonate with her viewers on a personal and political level. Since she began showing her work in 1989, Ondrizek has sought out alternative spaces, wishing to communicate her ideas with as broad an audience as possible. “I’m an academic,” she says, “and I’m not looking to produce something that’s going to be commercially successful. But if my work can teach someone something new or start a conversation—that is a different sort of success.”

Her earliest works—explorations in botany and animal life—heralded the development of her later pieces, which revolve heavily on that which makes us human on a biological and physiological level. A strikingly attractive, petite white woman, Ondrizek was raised a Catholic in a family with Jewish roots, learning early on that the individual is a product of their environment. When her mother passed away of cancer, Ondrizek was struck by the idea that she would be haunted for the remainder of her life, knowing that, thanks to genetics, the disease could strike at any time. Spurred on by this and the loss of her first child, she produced her 2004 installation, “Repairing RNA,” using an enormous linen panel dyed with an infected RNA cell. Women hunched over the panel, sewing “repairs” into the fabric, questioning the ethics of manipulating undesirable cells.

Having married into a Palestinian family, Ondrizek is also intrigued by the polarization others feel based on their external appearances. Works such as her “M168: Tracing the Y Chromosome” visually trace the genetic mapping of M168, the biological descriptor of the earliest traces of mankind. Similarly, “Fingerprint DNA” features the DNA testing of her husband’s entire family, drawing to light that humans, though each unique, are not so wholly dissimilar, and that no one person or group of peoples can be polarized on their genetic makeup alone.

“We’ve become a world of hybrids,” says Ondrizek, “like a hot house full of flowers. People may be different, but we’re all one in the same.” (Jaime Calder)

[…] – & the Geraldine Ondrizek show? If you’re in or around Chicago, I highly recommend taking a swing by the International […]