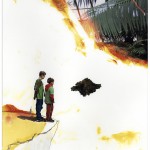 “Isn’t it an oriental picture?” asked Mark Twain on his pleasure excursion through Tangier, signaling the city’s rhetorical quaintness and the fulfillment of his desire “to see something thoroughly and uncompromisingly foreign.” Traveling through the Holy Land on vacation in the mid-nineteenth century, Twain recorded his impressions in “The Innocents Abroad,” the quintessential travelogue written by America’s foremost cynic. In those days tourists would have picked up Twain’s travel narrative to plan their trips, whereas today’s required reading is a guidebook such as “Lonely Planet,” containing step-by-step directions on how to obtain the best experience of a foreign city. In a photograph by Howard Henry Chen, two tourists sit in The War Remnants Museum in Ho Chi Minh City surrounded by fighter jets and guns but quietly engrossed in the pages of their travel manual. It’s a lonely planet after all. Surely guidebooks help us understand the historical significances of our destinations, but as Twain remarked in his leisurely adventure, “We had no disposition to examine carefully into anything at all—we only wanted to glance and go.”

Chen’s photograph, seen in conjunction with his other images in the group exhibition “Are We There Yet?” posit the familiar jaded perspective of the world traveler. That one can be so far from home and surrounded by the hyper-real wonders of a distant world, and yet feel that it’s all been seen before, is a symptom of a life lived in too close proximity to images. This is only one point of view about travel in an exhibition with eight other photographers wherein the vagaries of movement across land are explored. Curator Dawoud Bey considered the various perspectives of travel, from the poignant to the leisurely. For some, travel means simply purchasing a ticket. For others, restrictions, documents and planning preclude a first step.

Bey is known primarily as a portrait photographer. His models are the people in the community he happens to be visiting, so when he is invited by a museum to produce a new body of work, it is understood that he will engage the residents, often teenagers, by including them in a photograph. “Are We There Yet?” is a natural extension of Bey’s career. Although he did not produce photographs for the current show, he is well aware of what it means to travel to a new place and take a photograph there. Bey’s photographs present the essential qualities of a sitter’s personhood—not their identity as it is tied up in class and tastes and desires, for all that is momentarily stripped away—but some aspect of their nature as a human is revealed. Bey coaxes out a moment of quietude from his sitters, mostly achieved by constructing a still moment in an otherwise frenzied world. In this respect Bey promotes a humanist attitude. Similarly, “Are We There Yet?” strives toward a cosmopolitan understanding of the world and its inhabitants.

Bey recently launched a blog to vocalize his work and comment on the practices of other artists, curators and critics. Titled “What’s Going On?” the blog brings together a community of readers who appreciate Bey’s perspective on what’s important in the arts today. One post praised artists who curate exhibits, as opposed to curators who do not make objects, as having a direct insight into what an object means. Meaning, for Bey, is intricately tied to how an image is constructed. While non-artist visitors to an exhibit may or may not comprehend that a picture is good because its compositional elements are skillfully articulated, they will perhaps understand it intuitively. Indeed most contemporary viewers are exposed to image-overload daily, so we are good “readers” of the image. We may not be able to name their parts, but when constructed images hit an emotional cue, we follow along quite aptly.

Bey’s titular questions—a blog called “What’s Going On?” and the exhibit “Are We There Yet?”—reflect a desire to take the pulse of the world. In his photographic portraits, Bey says the ideal is to produce “something that resonates with a real sense of presence.” This is duly true in “Are We There Yet?” Suvendra Lawoti’s photographs, including a door punctuated by darts where a dartboard has been removed, a foam mattress rolled in a corner and other moody domestic interiors, are effective at provoking a feeling of loss, as if someone has just left or an era has ended. Adriana Rios’ video, “There Is No Time,” shows people loitering in busy city centers. They watch as life passes them by, and we watch them. Like Lawoti’s work, a sense of banal tragedy permeates the air and the light. This is the modern state of travel, and it is the modern condition—work, sustenance and progress impeded only by an ability to hone a degree of remove, that is, self-consciousness.

Dawoud Bey is Distinguished College Artist and Professor of Photography at Columbia College. “Are We There Yet?” shows at Hyde Park Art Center, 5020 South Cornell, through September 28.