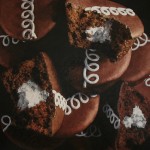 Pamela Johnson doesn’t have a sweet tooth, though her new paintings, six-foot-tall canvasses of cupcakes, cookies and waffles dripping buttery syrup, definitely suggest a fixation with junk food. Her fascination is more societal than personal, however. These works are Johnson’s attempt to not only update the classical notion of the still life, but to also show Americans what they’re eating on a scale that fits our proficiency for consumption. Her cupcakes glisten with whipped lard; her monolithic hamburgers weigh hundreds of pounds; her wedding cake is as sugar-coated as the big day itself; her peanut-butter-and-jelly sandwiches are sticky, moist, built for heart-attacks. The paintings look delicious, hypnotic and grotesque simultaneously. “These are the foods that most Americans grew up eating and have a certain nostalgia related to them,” says Johnson, whose update on the still life is charged with social relevance. “It’s sad to say, but our culture is about mass consumption and mass production. Junk food seemed like the perfect symbol of that. I decided to paint the highly processed, artificially flavored, mass-produced foods that define our culture. I wanted to show the overindulgence, gluttony and instant gratification that is so inherent in our culture. I wanted them to be not only larger than life, but larger than you. So big they barely fit on the canvas and all of it ready to fall over at any instant.”

While developing “Junk Food,” the California Polytechnic State University graduate (with a B.S. in civil engineering and an art minor) was also painting a series of diminutive houses, often tucked at the bottom of large canvasses with moody slate-gray skies filled with ripe clouds weighing down on the seemingly vacant residences. Women frequented these works as well, in post-violent repose, incredibly articulated fingers helping them crawl from alleys where we can only guess at what happened.

Regarding “Junk Food,” Johnson says, “A lot of people have said that the paintings are kind of gross, but at the same time the work makes them hungry. Which is exactly what I am hoping for.” What these foods lack in sustenance the paintings make up for in varied emotional resonance, and have already drawn much attention. At April’s “Artist Project” in the Merchandise Mart, three of the large canvasses were taken by The Frederick Weisman Art Foundation in California, and since then she’s shown junk food in New Orleans, Nashville and, through August, at Urbanest in Chicago.

Like all great art, Pamela Johnson’s junk-food paintings inspire discussion and present to us choices that, though difficult to make, are unavoidable as our social and physical health deteriorate under the weight of packaged and processed culture. Damien James)