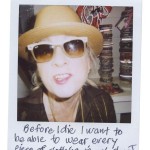 Polaroid announced in February 2008 they would cease production of both consumer and professional instant-developing film and cameras. Now, as the distribution line trickles to a stop and the price of the film has nearly doubled, photographers are beginning to feel the bite of loss. Two exhibitions in Chicago memorialize the medium’s heyday with fervent nostalgia.

The other arm of production was focused on artistic innovations. Large-format Polaroids, such as the 20 x 24-inch camera, allowed artists to take exquisitely detailed and colorful shots of their subjects, and in an opposite way from the snapshot. These cameras necessitated the artist to slow down and refine their shot as much as possible before pressing the button. Unlike the “fun” cameras, the large-format cameras and film were very expensive, and the results immaculate. In the case of the 20 x 24 Polaroid, special studios were built for artists to rent, and they came with a skilled technician.

I cast a wide net in seeking artists’ reactions to the impending death of the Polaroid. Whereas the younger generation of photographers is swept away by the digital wave and its many manipulating possibilities, an older generation has expressed deep nostalgia and sorrow.

“I’m not sure what I’ll do without Polaroid,” says Chicago’s Barbara Kasten, whose seminal 1979 “Constructs” series pushed the boundaries of the medium. “Maybe I’ll start painting again,” she jokes, nodding to an even older medium that has withstood the photographic revolution. Kasten was one of the first artists to use the 20 x 24 studio to produce large-format, unique pictures along with New York artist David Levinthal, whose “Blackface” series was recently shown in part at The Renaissance Society. These shots focused carefully on racist figurines, such as Aunt Jemima-type characters, and asked viewers to look again and look closely at something we think we already know well. “The colors are far more rich and saturated than any other medium except for dye-transfer prints, which disappeared long ago,” Levinthal says. “Something will truly be lost when the last of the Polaroid film is gone.”

Los Angeles-based Catherine Opie developed much of her career using the Polaroid. She responds wistfully, “I have one case left, one case with a date of when it expires; that’s it. No more click and the sound of the motor and watching the image slowly appear.” In 2000 Opie made the largest known instant photographs, a whopping 40 x 104-inch series of artist Ron Athey, whose extreme performances included body modification and ruminations on AIDS. Like Opie, Dawoud Bey used the singular, unique print to mirror his subject—the singular, unique human. “What can I say? It’s a real tragedy. I’m traumatized!” Bey says.

For Bey and others, using instant technology is a choice pairing of medium and concept. Instant-film technology has a host of associations that is often exploited by artists for maximum effect. “I was fascinated by Warhol and how he brought it everywhere he went in the seventies,” says John Parot, who was inspired to use Polaroids to document party culture. Jason Lazarus and Jonathan Gitelson noted its importance as a sentimental device, but when making their images, they look to the digital. “Makes no difference to me,” says Greg Stimac, “it’s the way it’s always been,” referring to the continual cycle of new technology creating a class of the obsolete.

Two concurrent exhibits in Chicago marked the demise of the medium. “Death + Extinction via Polaroids” at the Chicago Art Department smartly wrapped memory loss, mourning and death within the medium’s demise. One project asked participants to complete the sentence, “Before I die I want to ­­­­­­____” and inscribed their response in the white space below their portrait. Another project played with images of rising condo developments as metaphor—the generic captured by the unique. “Outdated” at the Country Club Chicago, a small project space in Bucktown, showed a (proclaimed) 900 Polaroids over the span of one weekend. Amateur porn, snapshots and multimedia interventions covered the walls like a makeshift roadside memorial.

When asked if the Museum of Contemporary Photography would focus an exhibit on the theme of the dying medium, Director of Education Corrine Rose didn’t think it would happen. “There’s a long list of past-tense media,” she says. Like the Cibachrome and the cyanotype before it, Polaroids have been used as an aesthetic choice, Rose notes, “but the practical application is gone,” and artists cope with the change; many embrace it. Rik Garrett, an artist and curator of the “Outdated” show, thinks the change is “a terrible mistake,” but adds that an investment company owns Polaroid. Their focus is on emerging technologies, not antiques. The continued use of Polaroid is a fantastical regression akin to using candles instead of electricity, but for many that candle has been snuffed.

I’m confused and disappointed at the way that this article was handled. Why was I even contacted for this article if nothing I said was going to be used? I thought that I provided some interesting bits of insight, being the curator of a Polaroid art show and a photographer myself. Instead the only piece of information taken from the 735 words I emailed Jason Foumberg was a fact about the financial state of the Polaroid Corporation. This would make sense if a well-crafted article could be written without my opinion (which Foumberg sought out). Unfortunately, this isn’t the case.… Read more »