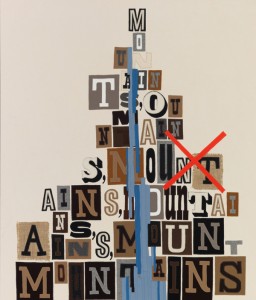 As we consider the fall lineup in the West Loop gallery district, it’s probably best to start with a roundup of a few changes that took place over the summer while the rest of us were off educating our palettes with Old Style, PBR and brats. First, the bad news: Lisa Boyle Gallery and Gescheidle closed. Both proprietors are continuing to work with their artists, but are abandoning their permanent spaces to become members of the aspirational class of wily independents. Gardenfresh is shuttering its doors at the end of the month after a final group exhibition, transforming itself into a vaguely defined “nomadic curatorial collective.” All of this is making me wonder if Chicago’s art market will ever be able to sustain a diverse gallery scene, or if it’s time to stop complaining and acknowledge that Chicago (at its best) is about short-term interventions whose benefits are innovation and a DIY ethic where anything goes. Some, however, are adapting. ThreeWalls downsized, eliminating its Solo gallery while maintaining its larger exhibition space and residency program. Not one to waste time, Scott Speh has moved his Western Exhibitions into the vacant spot, pleasing everyone who enjoys centralization. Finally, Bodybuilder & Sportsman and BucketRider have both changed their names to reflect the identities of their owners: Tony Wight Gallery and Andrew Rafacz Gallery, respectively.

The West Loop is busy this September and a few standouts deserve special attention. Two galleries, Kavi Gupta and Rhona Hoffman, are featuring independently curated exhibitions. At Hoffman, art critic and curator Terry Myers continues his theme of “ambient materialism” in “Angles in America.” Despite the precious title, the show is a broad and well-conceived treatment of geometry and angularity that spans forty years of American art. Myers’ focus on what Siegfried Kracauer called “surface-level expressions,” in contrast to grand historical statements, leads to a varied group of artists working in almost every medium. This is not your father’s modernism—Mary Heilmann’s 1980s bright abstractions interact with a Robert Overby post-Minimalist cast door and contemporary films by Jennifer West and Laura Riboli.

Curator, critic and ex-Chicagoan Marc Leblanc has put together a show of metaphysical, neo-Romantic Los Angeles artists at Kavi Gupta. Go for a crash course in form and formlessness. Rashid Johnson is also returning home for a double feature at Monique Meloche and Richard Gray. At Meloche, Johnson is creating “a creolized orgy between Sun Ra, Paul Gaugin, Kazmir Malevich, Debra Dickerson and Eldridge Cleaver (if his soul were no longer on ice).” Sound fun? Try the shea butter. Across the street, Diana Guerrero-Maciá has new work at Tony Wight; her combinations of text and image in large-scale collages underscore the arbitrariness and absurdity of symbolic representation, while experienced veterans Josiah McElheny and Cristina Iglesias present new work at Donald Young. Punk-rocker Patrick Berran’s abstract paintings at Thomas Robertello are at once more serene and dirty than expected. So fans, it’s a new season. Pull out the pompoms and grab your free beers, it’s game time. (Rachel Furnari)