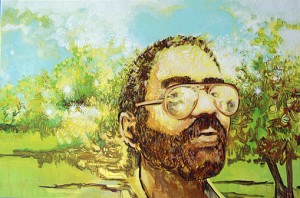 Allegoric, the curatorial force of Kim Hoffman and Matthew Hoffman (no relation), encourages the growth of artistic integrity and sincerity beyond the boundaries of the gallery establishment. Their method is to bring awareness to both emerging artists and alternative spaces.

The unique stylistic disparities between the near thirty artists who show regularly through Allegoric as a community form a cohesive body that at least inspires questions, and at most offers an exciting look at what is new, possibly what is next. “Aesthetic is not necessarily the most important aspect we are looking for,” says Kim Hoffman. “We are interested in the genuine nature of the work and the story behind it, the why and/or how it was created. The idea is to pass these stories on to the public or the collectors and make the artist and the artwork more than just another pretty picture.”

Contributing artists such as Michael Genovese and Chris Silva make honest attempts to address the need for positive social change in a culture willing to be easily distracted. Their graffiti-infused lyrical pieces are urban distillations that ward off desolation. Sighn, an artist for whom typography and the modes with which we communicate form the foundation of his work, reassures us with wood-cuts that simply tell us “it’s OK,” while Erika Somogyi creates soft, psychic remembrances as sentimental as they are satisfying.

Each artist stays true to their voice, and Allegoric hopes to broadcast that voice. “Our dream,” Kim continued, “would be to enable even one artist to be financially secure from their artwork, as well as emotionally separated from the commercial art world, and at the same time, to guide new collectors into the intriguing world of the artist and inspire them to not just buy an object, but to get to know a fellow human being.”

The two Hoffmans, both artists, designers and curators, had been running into each other for many years. Kim met Matthew through Ai Gallery, where they both curated shows, and which she directed. When Ai closed, they decided to launch their own forum based on their joint views about the value of truthful artistic expression. Since then, Allegoric has been hosted by several galleries, and will be exhibiting the work of seven of their artists at The Architrouve through the month of September. Both have found the curatorial process enriching for themselves as artists, but also as humans surviving on their creativity through the support of an equally creative social network. Kim goes on to say, “it is fascinating to follow a piece of artwork throughout its journey and see how its significance and/or meaning can change. This can happen in the artist’s studio while still in progress, on the exhibit wall or when someone decides to purchase the work.

Also, the people we work with are amazing and it’s just a lot of fun too.” (Damien James)