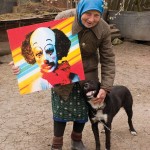 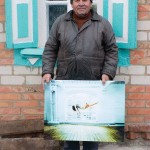 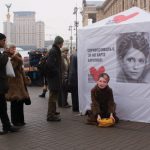 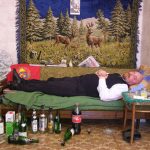 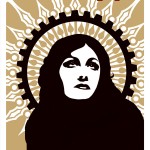 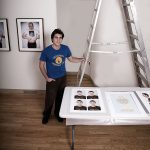 Ukraine has been in a constant state of transition since declaring its independence from the Soviet Union in 1991. Seventeen years of sovereignty have been marked by periods of deep poverty for many and robust wealth for few, political upheavals and mass protests, and a thrust toward modernization. As Chicago contains the largest population of ethnic Ukrainians in the United States, all eyes are on the homeland as a new batch of corrupt politicians threatens to set a course for turbulence. An exhibition opening September 12, “New Print Politik: Post-Soviet Politics and Contemporary Art,” at the Ukrainian Institute of Modern Art, depicts the situation from the artist’s viewpoint. Alongside the Ukrainians, the Russian, Slovakian and Cuban perspectives are considered in the exhibition, as all were previously under the rule of, or dependent on, the U.S.S.R.

“Sometimes it’s painfully obvious that art can’t be made how it was made before the Soviet collapse,” says the exhibition’s curator Roman Petruniak. While the elements of traditional national culture, such as food and religion, embroider the identity of a Ukrainian, it’s the high-rise condos and the grab for the West that’s both worrisome and worth criticizing. Much of the new political work, as framed by the exhibition, didactically and directly engages the problems facing citizens and artists. Any heavy-handedness is excusable, for these are heavy times.

The limits of artistic expression are an indicator of individual autonomy within a society. It’s what we can get away with that defines the forces bordering our actions. In a video titled “Lay and Wait,” Nickolay Ridniy lays down on the sidewalk in front of the German embassy in Ukraine to perform his continual frustration with being denied a visa. Gaining permission to travel outside the country is a common problem. Ridniy’s act of laying down in a public path, and his subsequent arrest, interrogation and threats of forced hard labor highlight the stale taste of brute power that has remained all these years after the Soviet pullout.

In other artworks with strong political messages, the artists are able to make their statements unmolested by the law’s strong-arm. Again, Ridniy, together with fellow artists Ann Krivenzova and Sergey Popov, calling themselves SOSka Group, wear masks of the most famous politicians in Ukraine and panhandle on streets and the subway. It’s a not-so-subtle hint that political promises of change are impoverished.

One mask worn by the SOSka Group represents Ukrainian president Viktor Yushchenko. As a stalwart of Ukraine’s bid to enter both the European Union and NATO, Yushchenko seeks to push the country far into westernized territory—in the opposite direction of Russia, which still looms large over the former Soviet republic by providing resources such as oil and other energy supplies. The recent war between Russia and Georgia exemplifies the interest that the Russian giant still invests in its castoff countries. Newsweek called President Yushchenko’s prospects with NATO an act of “Russian roulette.” Dick Cheney’s visit to Ukraine in early September epitomized the country’s march on the fast track to privatization and capitalist rule, which, for many Ukrainians, marks a step toward progress, and for others a visitation from Cheney is tantamount to a prospector surveying untouched land, or a fat man fingering fruits for their ripeness.

“New Print Politik” is the outcome of Petruniak’s travels this summer to such far-flung locales as Ukraine, Slovakia, Cuba and Russia. Although the Institute has exhibited heavily politicized art in the past, such as 2005’s “Ukrainian Art and the Orange Revolution,” Petruniak expects his exhibition will be an eye-opening experience for Chicago’s local population of Ukrainians. How one understands the Ukrainian situation differs depending on whether one dwells beside Lake Michigan or the Black Sea. The divide concerns middle-class prosperity—widely available in America, but severely lacking in Ukraine. In an example of the disparity between Ukrainians and Ukrainian-Americans, Petruniak took some immersion language classes during the beginning of his trip in Ukraine, where he found the phrases he had picked up in his childhood from his father sounded to the natives as if he were living in the 1920s. Perhaps Ukrainians who are outside Ukraine, safe from the political and economic upsets, live at a comfortable remove from the reality of what brothers and cousins in Eastern Europe might be experiencing. Petruniak calls Chicago’s Ukrainian Village, with its shawl-clad grandmothers and quaint borsch-and-dumpling cafés, a “living history.” He hopes to connect the exhibition’s visitors to the living present.

The Ukrainian Institute of Modern Art (UIMA), founded in 1971, boasts two large gallery spaces. One holds the permanent collection and features mostly painting and sculpture from post-1945 to the present that takes cues from Abstract Expressionism and Cubism. These works directly challenged Stalin’s state-imposed style, Socialist Realism, which permitted only glorious representations of the nation, its leaders and workers. In its heyday, Ukrainian Modernism was avant-garde and threatened polite society; today, these styles have become traditional and formalized. In the other gallery, Petruniak’s exhibition contains no abstract art. Here, everything is told on certain terms and each work tells a specific story. There is no place for ambivalence in the next avant-garde.

Before setting foot in Eastern Europe and Cuba, Petruniak sent out a call about the exhibition to artists. In Kiev, two largely influential institutions, the Center for Contemporary Art and the Edios Foundation, picked up the notice. They put Petruniak in contact with artists whose work contains equal part activism and political commentary. The idea of exhibiting specifically printed work, that is, serigraphs and photographs, seemed logical given the steep cost of shipping artwork and the near-promise that Customs would make things unnecessarily difficult. Once he began visiting artists’ studios, though, Petruniak found that reproducible media prompts a host of meaningful associations. The possibility of reaching a wider audience through mass dissemination perfectly mirrored much of the works’ themes—that the public should be made aware of, and can actively participate in, the direction of their lives. Petruniak returned to Chicago with posters, ‘zines and many digital files of the photographs he wanted to have in the exhibition, which he printed here, and which undercut the singular preciousness of the art objects and affirmed the necessity for broad access to the political message.

The SOSka group delights in the possibilities that arise from changing a unique object’s context, an experiment made possible by reproduction. “Barter” is a video showing high-art reproductions (likely unlicensed)—including some of the contemporary art market’s best-selling darlings Neo Rauch, Cindy Sherman and Chuck Close—traded for livestock and vegetables in a small rural village in eastern Ukraine. A small exhibition is installed on the side of a shed, and local farmers and villagers are invited to pick their favorite work of art. Barter is then negotiated. Cindy Sherman dressed as a clown fetches one live chicken. A work by Komar and Melamid—painters who mocked the Socialist Realist style by replicating it to saccharine heights of kitsch—is selected by a farmer. No doubt Komar and Melamid would find ironic delight in the peasant’s lack of taste. The garish landscape goes for two buckets of potatoes.

The bartering video not only highlights the ridiculous divide between the rich and the poor, or high and low tastes; it is also quite an accurate depiction of the daily economy in Ukraine where bartering is a fact of life. As the government tries to veer the economy to a capitalism that works for itself and for its rich allies, people are still having to make do with what they’ve got. Here, do-it-yourself isn’t just a political stance; it’s also a survival tactic. By the end of the bartering video, one feels that the villagers were deceived, for they’d be better off keeping their dozen eggs than owning a bit of wall art, and so the value of their labor versus the value of art becomes very clear.

Or, it’s a certain type of art that is devalued by this exchange, namely art that addresses only aesthetic questions. Contemporary American art is a luxury that’s as politically effective as cake decorating. For artists living in post-Soviet states, however, if there is a privilege worth expanding, it is the issue of personal and political freedom. Surely they have the freedom to paint an ugly abstract picture if they care to, but formal and aesthetic concerns are not the contested terms. Where Stalin’s Socialist Realist style sought to seed the public’s consciousness with agit-prop—where “You” were always being addressed—so too does the new public art ask its viewers to become participants. Critical pedagogy combines education, outreach, collaboration and activism for common people and the common good. Public interventions, workshops and street posters work well toward this goal.

In addition to his work at the UIMA, Petruniak is a founder, with Ben Schaafsma and Abigail Satinsky, of the Institute for Contemporary Understanding Between Art and The Everyday, or InCUBATE, in Logan Square. Like similar institutions in Chicago such as the Stockyard Institute and Mess Hall, programming at InCUBATE provides outreach for marginalized groups—including artists. A residency program gives artists the space to work freely, and a grant-giving program redistributes money to artists collected from subscriptions to a weekly soup luncheon. They also recently launched a touring exhibition titled “Other Options” that, in part, self-reflectively calls into question the “Nonprofit Industrial Complex.” While in Eastern Europe, Petruniak met an artist who showed him his backyard shed and introduced it as an alternative artist-and-community-based center. “Here I was thousands of miles from Chicago,” says Petruniak bemusedly, “and looking at InCUBATE’s Eastern European twin.”

The spirit of collaboration carries through from the arts organizers to the artists themselves, from the SOSka group to R.E.P. group, and from mail art collaborations to Cuban artist Eduardo Marin’s Nudo S.A., an artist group comprised of Marin and the public who views his art. Marin’s silk-screened posters on display in “New Print Politik” are advertisements for group activities, such as a demonstration or an art exhibition. “La Plástica Joven Se Dedica Al Béisbol (Young art dedicates itself to baseball),” from 1989, commemorates an event where many artists felt their creativity stifled under Castro’s regime, so they gathered to play a game of baseball. The poster shows Michelangelo’s iconic David—the little guy who conquered the giant Goliath—wearing a baseball glove. Another work, “MEARTE en la pared,” announces an art exhibition. The phrase is a play on the word mearte, which can be read as both my art on the wall and shit on the wall. Given the unavailability of expensive art supplies, one likely would have seen the artist’s figurative waste on display—the only creative solution.

While Cuba was always a sovereign state, notes Petruniak, it did rely heavily on the U.S.S.R. for food and oil, so the Soviet pullout caused tremendous economic hardship. Petruniak visited Cuba for two weeks this past summer, and he described its culture as “romantic but scary; gritty but tenacious.” The icons of revolution hold a strange place in Cuba’s heart. Che Guevara, hero to the last generation, represented hope for a better life. Yet, as much as Che’s face floated from billboards to t-shirts, the promise went unfulfilled. “Artists began to ask the question, ‘What is the nature of revolution?’” says Petruniak, when the revolution doesn’t deliver. “‘Why continue Che’s revolution when we are poor and hungry?’”

Petruniak found young artists posing this same sentiment in each place he visited. Given the new freedoms granted to the public and artists after the Soviet collapse, artists asked, what do we do now? What does it mean to make political art today? Who is going to pay for it to be made?—certainly not the state. These are key questions about the exhibition, says Petruniak, and they’re difficult to answer. “If it was easy,” he says, “I wouldn’t have put on the exhibition.”