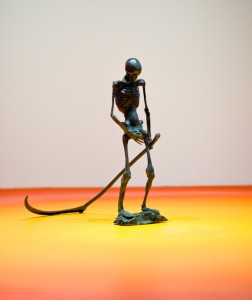 In contemporary aesthetics, the terms decadent and decadence have assumed such a plurality of meaning as to render them, under most circumstances, harmless of the abusive qualities they once assumed. Even in the late nineteenth century, when it came to prominence in literature and literary criticism, decadence was used not only as a slur or an accolade, but as a description of a complicated set of historical forces altering human experience at sensual and social levels. Decadence pointed to the physical and psychic exhaustion of industrialized labor as well as to the material excesses, class stratification and societal ills that such revolutions in production made possible. At a time of radical change and uncertainty it became a placeholder for a collection of fears and desires; a catchall that incorporated the dizzying new realities of modernity with the profligate mores of a society in decline.

We require no list of twentieth-century disaster or progress, then, to imagine why decadence returns as a reactionary convention throughout the period, or to explain why it might re-emerge as a prominent theme in the twenty-first. That decadence may have particular resonance in Chicago is the more specific claim of Lisa Wainwright, curator of the inaugural exhibition “Ahh…Decadence!” at the new SAIC Sullivan Galleries in the former Carson Pirie Scott building on State Street.

To support this claim, Wainwright references a history of political corruption and decadent art in Chicago. While the former is indisputable, the latter is a little peculiar, especially as she veers into “The Dark Knight” as her primary evidence for Chicago’s Gotham. The movie’s glossy-grim special-effects spectacular becomes a model that dominates the exhibition. On the surface, this isn’t a big problem. Wainwright has culled forty-two artists currently or historically related to the city who mostly manage to deliver on Théophile Gautier’s famous 1881 call for decadence to be “nothing but art arrived at the point of extreme maturity yielded by the slanting suns of aged civilizations: an ingenious, complicated style […] listening to translate the subtle confidences of neurosis, the dying confessions of passion grown depraved, and the strange hallucinations of the obsession which is turning to madness.”

With a pronounced emphasis on painting, “Ahh…Decadence!” is filled with references to sexuality and mortality, excessive materialism and hysterical sensibilities. It is a triumphant exhibition, even in death; but the “beautiful sickness” registers almost none of the actual conditions of the anxious preoccupations of living in the twenty-first century. The exhibition’s design, by SAIC alum Sanford Biggers, reinforces the association of decadence with an excessively decorative form that threatens to overwhelm the eye with rich ornamentalism and a profusion of pink and silver.

In a number of instances the artists push past the wild accumulation of chandeliers, paint, penises and decaying organic matter to unearth a fetid mixture of modernist malady, dark humor and absurd loveliness that make decadence a compelling concept for contemporary art. First inside the door is a sculptural installation by Robert Davis and Michael Langlois, “La Petite Mort,” which is, most appropriately, a little bronze skeleton. The skeleton is pissing onto a floor that has been painted by the artists in expanding waves of yellow and orange. The diminutive figure is dwarfed by the bright rings, and the piece’s action takes place in the play between death covering the world in his piss and the glowing radiance of the floor.

The paintings of Richard Willenbrink could not be better poised to accept J.K. Huysman’s description of the decadent period’s “gamey flavour and its discolourations as of over-high vension.” In “Salomé,” Willenbrink unites the exaggerated colors and paint application of his still-lives with the heightened atmosphere of Salomé masturbating next to John the Baptist’s head. That the money-shot is captured in a mirror, but obscured by a knee only adds to the sense that Willenbrink is entirely in control. Laurie Hoggin’s “Woman’s Work,” a series of paintings of pink rabbits with menacing, even terrifying, expressions, works an emotional scale of overwrought cuteness to an anxious, angry conclusion.

Wainwright has included a few Anne Wilson linens stitched with human hair and brilliantly saturated Jeanne Dunning photographs that teeter on the abject end of decadence. Gina Litherland contributes a small, stunning and bizarre portrait, “Daemon Roses,” whose madness and opaque symbolism are echoed in large paintings by Phyllis Bramson. Mary Lou Zelazny’s ethnographic collages discover a world of strangely costumed peacock men—all pride and display. While the exhibition is largely representational, abstract painter Amy Mayfield’s psychedelic landscapes have the most luxurious surfaces of all.

At the opening, new SAIC President Wellington “Duke” Reiter spoke of the Sullivan Galleries as a foundation for new collaborations with extant cultural institutions and a harbinger of the kind of influence SAIC hopes to have on the contemporary art scene in Chicago. Anyone who knows anything about personal and professional intimacies in Chicago’s art market knows that the SAIC’s presence scarcely needs enhancing. As a display of the school’s importance—as educator, employer and venue—to Chicago artists at all levels of their careers, this show could not be more convincing.

“Ah…Decadence!” shows at the School of the Art Institute of Chicago’s Sullivan Galleries, 33 South State, Seventh Floor, through September 27.