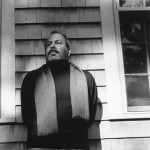 If you have lived in Chicago at any point during the last twenty years there is a solid chance you have heard John Fraser’s name. With a an extensive exhibition record and numerous solo shows at Roy Boyd Gallery, Fraser is an artist who considers himself firmly planted in the experience of Chicago art.

One of the great lessons of minimalism, from Mondrian to Peter Halley, is that it is the viewer’s responsibility to complete the act of looking; reading, as they say, is not a passive act. It is in this spirit that I was thrilled to hear that John Fraser does not consider himself a book artist. Perhaps my initial reading of his work had been too limited, being that it’s easy to get caught up in Fraser’s use of an aged material’s sentimental notions on the surface of his works. In fact, there’s also a sophisticated play of shapes and forms. It’s likely that any lover of all things book-related will be drawn to Fraser’s art, although books represent only a fraction of the materials used in his pieces.

I’m really curious to learn more about the content and motivation behind your work, especially how you may or may not have been influenced by Minimalism.

My work is primarily about the act of seeing or act of looking. I would say one of my primary concerns is to create an object and I am very much involved with making a thing that hopefully can hold a viewer and provide something to look at and study, and reflect upon. Geometry is one of
the skeletons I hang all that on. Color, in a very strict, disciplined way is employed for the same purpose. I have always been considered someone that doesn’t work with color, or someone that would be considered somewhat of a Minimalist, and I am, but I don’t want to be limited as someone who just works in a reductive way, because those are my forbearers, the minimalist artists of the 60’s and 70’s. But I am also a romantic in some ways; I am a student of art history and have many people I feel I am indebted to, I am trying to be respectful of what has come before, but also lock it in the present.

I used to know a guy that was obsessed with collecting old books; he would say he wanted a bottle of cologne that smelled like damp, musty cardboard. Do you think the two of you would have much in common?

I know exactly what you are talking about in terms of those sensory responses to such things; like us, they have a collected history, have been touched by many people and carry a certain amount of history to them. Regardless of what the content of those things are—and those are some things that I find very attractive—but I would have to say I’m not a book artist and I’m not so much concerned with books in terms of all the loaded meaning that they possess, what they carry forward and their function in today’s world relative to current technologies. But all of those things are very much respected and taken into account.

I’m glad to discuss how your pieces move beyond the literal substance of what they are made of or how they are made and how the formal elements carry the conversation into a deeper discussion on the nature of metaphor and language.

Absolutely. That’s all governed by an origin, the origin being formal, and material. They do represent my values, which are very concrete in terms of how I want to conduct my life, but in terms of my art making they are hopefully directed at displaying very high values, in what I believe is a way to live. And geometry, as it has been for a while, carries all of that. The book is just one component; once it becomes a part of the picture plane I negotiate that plane. Nuance, subtlety, and beauty and all the things I think are worth looking at, those all matter to me.