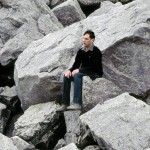 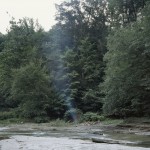 John Opera is a photographer who goes searching for personal aesthetic experiences, and he’s also an outspoken critic of his chosen medium. I recently spoke to him about his current solo exhibition.

The show is the culmination of a lot of the things I’ve been concerned with over the last three years, and this has been the perfect conclusion for me. The work speaks to notions of interiority, whether it’s being inside somewhere and meditating on a space, or being outside, in an exterior setting, and being absorbed by it. I was hiking in Zoar Valley, outside Buffalo, New York. You can go in there for three or four miles and not see anybody. I photographed a guy with a telephoto lens, so he wasn’t really aware of what I was doing completely. He knew I was there and that I had a camera. He acknowledged me and then continued to do his thing. It’s an eight-second exposure. The smoke and the stream are blurred, yet this man is very still. It’s not manipulated in any way; it’s a documentary image. For me, the important thing in the image is that there’s this guy who was probably there to seek out something he wasn’t getting in the rest of the world. It’s an image that’s very absorptive, in the tradition of Jeff Wall, where this person is engaged in this super-absorptive, singular, personal moment, and the whole world is going on behind him.

What did you go into the forest looking for?

I don’t know; I never know. I tend to get interested in landscape around the time the seasons start to change, right before the fall foliage turns or right before things bloom, very early summer, very late winter. That’s what drives me initially to return to landscape as a subject matter. All my landscapes are made in western New York. For me, there’s a very personal drive because these are places that I frequented as a kid with my father, a retired geologist. My work speaks to certain aspects of origin, as well as just being there and observing. More often than not, something else happens. I would go out and sit in the woods for eight to twelve hours alone. Almost always it’s important for me to be alone. In the picture “Zoar” I like to imagine this persona as an equivalent of my own kind of desire to seek out these places and use them as meditative tools.

How many photographs do you take in an eight-to-twelve-hour period?

Sometimes none, and sometimes two-to-three. The way I try to keep it authentic for myself is to not really think about going out with the specific intent of making a picture—of course that’s why I’m really there, but I try to be patient. I use a large-format camera, so that process is really about slowing down. It’s not the kind of camera that you just shoot off. Using that kind of camera trains your eye to recognize images without looking through the camera, necessarily. I like that. For me, it becomes much more about the space that’s not so tied to looking through a viewfinder. There are things that I respond to that remind me of painting space—and of course it all ends up as a photograph.

Why do you bring up painting?

There is the photo ghetto: the photo world that folds in on itself that is only really serving itself. It’s associated with the grand failures of photography in the twentieth-century, and it includes the whole feminist critique of photography being a machismo mode of representation, or the myth of the “decisive moment,” or staging. There’s part of photography that’s still closely connected to failures in late Modernism that most other art forms have recognized and moved on from.

That seems to be a developmental stage inherent in the artist rather than the medium.

For me it certainly was. When I was a kid I was reading Ansel Adams books and really looking at those seriously. It wasn’t until I was an adult that I realized his work is just hopelessly boring, and almost capitalistic. It’s staggering that he was able to maintain his photographic project for the duration of his entire life and arrive at nothing except technical prowess. His work is often associated with political agendas and popular recognition of spirituality or beauty or this or that. Pictures like that are very much theatrical; they are very much about sending something outward that’s very pointed.

Do you believe in purification by nature?

Yes, I think it can occur in many spaces, but it’s a myth. Anyone walking into this show can have a fantasy of solitude. The interesting thing happens with the work in terms of tropes and problems with cliché; it’s also where people attack the work. I like the fantasy of myth. You know, you read mythical stories and it’s like the landscape is always waiting to accept the person in the story. I don’t have any delusions about “don’t forget to love nature” bullshit. For me it’s more transcendental. I don’t think about how these pictures tug at people’s heartstrings. For me it’s a lot more subjective.