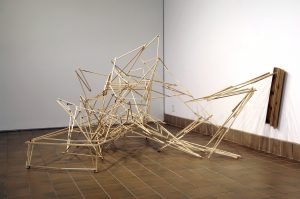 For his first solo exhibition, Trevor Gainer examines contemporary gallery space as a parallel to the space of a collapsed mine. Taking a rescue diagram from the 2007 mining accident at Crandall Canyon Mine in Utah as a starting point, Gainer makes several sculptural propositions for technology that could be helpful to escape the deathtrap of the gallery/collapsed mine. Just as the white cube gallery is a blanked-out space, the mining accident creates a void where modern technology does not exist and “communication is reduced to primal screams and rudimentary percussions,” Gainer says. “It is not my intention to create a mining accident, but instead I propose a system of objects that are derived from a similar sense of interstitial agency, objects that struggle to find a place between utility and abstraction.” Gainer addresses this tension via several modes of recent art historical practice, e.g. three dimensional abstraction, post-minimalist aesthetics and site-specific assemblage. “Untitled (bore hole 3)” is a three-dimensional drawing of a modernist chaise lounge emanating from a cardboard tube in mess of poplar stick abstraction, recalling some of Evan Holloway’s sculptural experiments, suggesting a parallel between the need for urgent invention within the spaces of art and disaster. (Sze Lin Pang)