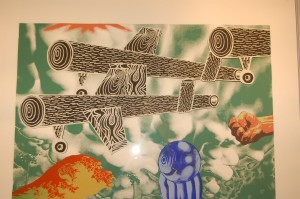 Aviva Alter and Alan Lerner create works of art that examine the human relationship with war and disharmony. In their first collaborative show, “Warning Signs,” this husband-and-wife team reflects on the horrors as well as psychological implications of conflict. Using screen prints, Lerner contrasts images of terror or violence with often-unrelated, irrelevant images in order to raise questions about the nature of the violent act depicted. For Lerner, “making art is an act of resistance,” to quote his role model—the performance artist Anne Hamilton. “Art either represents what I feel about the current state of affairs, as a tool towards social change, or ending war, or altering what’s going on,” he says. Alter, in contrast, uses garments she has sewn and inscribed with thoughtful statements to explore a metaphysical search for meaning in a life infused with both natural and enforced (i.e. war) death. “My work is about how an anxiety-driven world can bring people to the point of settling a situation through some kind of war or holocaust,” she says.

In Lerner’s visually loaded piece, “Killing to Save Lives,” images of mechanical ducks march over the face of a victim of the Hiroshima atomic bombing. “I try to raise questions concerning doubt, responsibility and the clash between our culture and the natural world,” Lerner says. “There’s not a whole lot of talk about the effects of war on the environment and animals.” In Alter’s piece, “How Do You Keep Warm,” a woolen quilt inscribed with the words “Exhale One Last Time” concerns the moment of the last breath, as experienced by Alter, who witnessed her own mother dying from cancer. “It is about looking for meaning and that goes beyond her [her mother’s] life and beyond my own,” Alter says. The woolen, armless military vests that once belonged to Alter’s great uncle, inscribed with the words “Release Longing,” paradoxically infuse comfort and severity. “By cutting off the arms [in the vest], I want to explore what it is you can lose through war, whether it’s an arm, or your mind,” Alter says.

Alter explores the emotional terrain of death and loss while Lerner seeks to remind us of the ultimate responsibility of living in a society driven by a “full-time and permanent state of war.” Mercilessly, Lerner takes a stab at things held dear, such as warplanes, which he mocks in the print showing tree logs flying through the air beholden by the fanciful wings and wheels of an airplane. “I used the images of logs to diffuse that horrific beauty of the warplanes, to make them absurd,” Lerner notes. Throughout “Warning Signs,” the seemingly absurd and incongruent make perfect sense. (Marla Seidell)