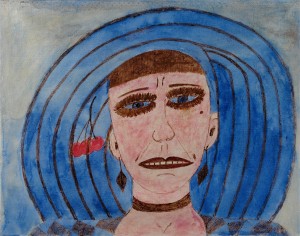 A Chicago original, the self-described “French Impressionist” Lee Godie brought a breadth of personality to her work, subverting the art establishment with a passion and a lack of formal training. Since being discovered in front of the Art Institute in 1968, Godie, a vagrant, drew crowds with her innate ability to accentuate natural and fleeting beauty in an urban landscape. Crimson, maroon and azure birds accompany paintings of spiraling leaves on a wall at Intuit. A row of daisies repeats in the style of Andy Warhol against an alternating blue and red backdrop. Perfume vases fall on each other rather than stand in a row. A double self-portrait with wide eyes includes Chicago’s glowing street lights. Godie’s writings emphasize her unique personifications of nature: “Neath the tall spreading tree birds and squirrels drink there [sic] tea. Each one takes a dainty sup from a tiny a corn-cup [sic].” Photo-booth photography shows her wit, as Godie adds color to her lips and shows a range of accoutrements from frayed hair and paintbrushes to berets and scarves. The flare in her eyes and amused smirk is contagious, bringing viewers into Godie’s intriguing world whether she’s in her outdoor “studio” or fanning herself with five and twenty-dollar bills. (Ben Broeren)