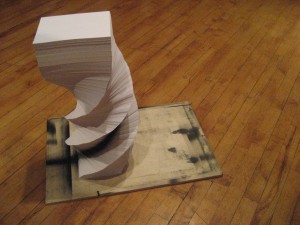 In the press release for the recent exhibition at Alogon Gallery, New York-based artist Seth Price muses on the historical and contemporary implications of phenomena that “hover on the sublime verge between fascinating and boring.” For “Grey Flags,” curators Will Megson and Forrest Nash compile a group of works by seven artists that address these concerns. A crude, quick and sparse aesthetic is present throughout the exhibition, such as Zach Jones’ untitled drawing of a warrior holding a machete on crumpled sketchbook paper over which faded text reads: “Never stop fighting for your beliefs.” Jason Jozwiak’s stacks of paper dusted with graphite powder on board function as illusory images as well as sculptural objects in space. Understated drawings of the corners of rooms sketched lightly in blue and grey on yellow paper suggest vaginal spaces for artist Elizabeth Weiss. Many of these works derive from the artists’ personal explorations, but are presented here at face value. In a similar vein, Jordan Wolfson’s video “Infinite Melancholy” straddles the line between an off-color joke and the beautifully serious. The four-minute digital animation sweeps over a landscape composed of text that reads over and over, “Christopher Reeve.” This piece corrupts the viewer’s experience of the would-be beautiful, through its association with “Christopher Reeve” as a social phenomenon—including an icon of invincibility versus disability. As a whole, this show marks an investigation of a meaningful dialogue between boredom and fascination. (Jamie Keesling)

Alogon Gallery is located at 1049 N. Paulina 3R, on the corner of Paulina and Cortez. Doors on Cortez. Sundays, 1pm-4pm.