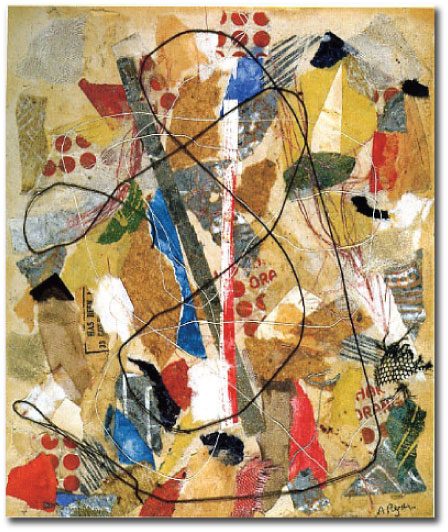 RECOMMENDED
“Suitcase Paintings” at the Loyola University Museum of Art has a simple premise: to show small paintings (that would fit in a suitcase) by Abstract Expressionist artists who were, as the myth goes, addicted to large canvases and large egos. Over fifteen artists are presented in this packed exhibition; assembled, they represent a cross-section of the twenty years of American abstract art between 1945 and 1965, and they defy the age-old stereotype. Robert Nickle’s delicate collage of “street scrap” from 1961 both echoes the tradition of collage from Dada and brings a social awareness to hard-edged abstraction by making rectangular forms from teabags, cardboard and empty matchbooks. Some works prefigure contemporary painting practices while others ride the coattails of more famous artists. Generally the works closer to the 1960s, such as Albert Kotin’s and Mary Abbott’s, stand out for their bright palettes and airy compositions. Abbott’s piece “Night ride after the concert” from 1955 on a mauve background plays several large dark strokes against ebullient swaths of blue, fuchsia and red. The interplay between the strokes and the warm background leaves one imagining the summer night wind in their hair. Overall, the exhibition is equal parts good and bad, ugly and sexy, archaic and puzzlingly current and is worth a look for those who love painting. (Dan Gunn)

Through October 26 at Loyola University Museum of Art, 820 N. Michigan.