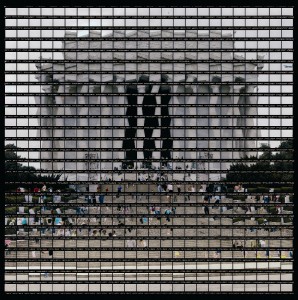 RECOMMENDED
In a complicated process of analysis and recomposition, Thomas Kellner travels around the world taking tiny color photographs of slivers of monuments and the interiors of storied public edifices, and then fits the fragments into tightly structured grids that render in a cubist manner the scene that a single seamless shot of each subject would have taken in. Kellner’s re-imagining of his subjects makes them appear as though they were seen through a wire cage, which draws us to attend to the elements, which on close inspection appear to rebel against their inclusion in a coherent and familiar order. A depiction of the steps of the Lincoln Memorial on a summer day shows hapless tourists teetering at all conceivable angles, as the steps break down into paving stones that jut out crazily. This is not desecration or even deconstruction, but sophisticated wicked wit or the perception of a drunk on LSD. (Michael Weinstein)