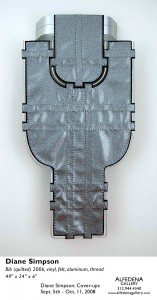 We all know how clothing emotes: shoulder pads are bossy, a bonnet is prude and ruffles like to be ravaged. That it’s easy to take a garment’s personality for granted—clothes are often called our second skin, as if our limbs sprouted thread—is cause for reconsidering how an outfit has the possibility to transform its wearer. In the maximalist camp we’ve witnessed drownings in fabric and ornament, and in the minimalist movement we’ve seen refinement pushed to ascetic extremes. (And, of course, there are fat pants for when you just feel like crying on a Friday night.)

Diane Simpson’s sculptures are clothing personages. In her current show, titled “Cover Ups,” the slightly larger-than-life objects are mostly torso-shaped and hollow, emphasizing cavities where a body would normally enter. Forms inspired by vests, aprons, collars, umpire’s padding and an x-ray shield for medical patients aren’t made to be worn, though, and seeing them on pedestals, hanging from the ceiling, and upon stages of Simpson’s own design turns them into purely visual objects.

Simpson’s sense of materials and construction places her sculptures on par with avant-garde fashion design. Yet, where designers have deconstructed fashion to death, Simpson constructs fashion-based forms from the pop culture minefield. “Vest,” from 2006, features patterns as seen on tiles in a New York City subway station. Seventeenth-century aristocratic muffs and imperial bibs, the graceful geometry of 1920s Art Deco, Japanese armor, and 1950s-era matronly socialite garb are plucked as inspiration with equal gusto.

Simpson, who was born and raised in Joliet, now lives and works in Wilmette. She has been showing her art in and around Chicago since the late 1970s. Much of the garment-based work was conceived for a commission at the Racine Art Museum in southeast Wisconsin. In 2007, Simpson built multiple sets for the museum’s storefront windows. Appropriately, the museum is housed in a former department store.

The adjective “architectonic” is often applied to the hard, angular forms that Simpson creates. Garments have served as inspiration for many previous sculptures, but their final forms tended to be less literal. At the core, Simpson is an abstract sculptor who delights in the various associations that a pattern or form may induce in a viewer.

Simpson’s work is often credited with promoting an empowering image of femininity. Given that her aprons and dresses stand upright in bold poses, it’s difficult not imagine the female-associated forms as symbolic. It might be, however, that the angular bodies and boxy, broad-shoulders are byproducts of Simpson’s particular construction process that includes a penchant for symmetry and a taste for rigid materials. The feminine aspect is incidental to the overall formal vision, and perhaps Simpson’s objects are best deemed Female only in contrast to H.C. Westermann’s playful constructions, which, if we need to assign a gender, are henceforth Male. (Jason Foumberg)