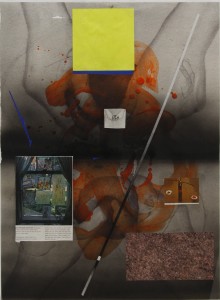 This spare group show of five Los Angeles-based artists has a hard edge and a dark tone. The abundant white space between pieces and the very air in the gallery seem brittle and on the edge of shattering. What in the room is not colored in neon is black or silver, and whatever surfaces don’t absorb light entirely, black-hole fashion, reflect it back at the viewer with a glare and a distorted image of the self. Julian Hoeber’s “Test Head” (2008), cast in aluminum and riddled with bullet holes, stands on top of a mirrored pedestal, showing the viewer her own legs, torso-less, with this, one of many possible heads, set on top of her thighs. One’s own head is nowhere to be found, and instead a monstrous hybrid body comes into being. Sayre Gomez’s collages, sparse and striped with little lines of gold and bright pink, show us black and white hands squeezing tender fruit. A young boy—ourselves, perhaps—kneels on the floor, absorbed in cutting paper for collages. Brett Lund presents a series of large, Franz West-style heads, crafted from decidedly un-bust-like materials—pitted foam, plastic wrap, neon paint. These partial, pained bodies almost hold the space around them, but at the last, decisive moment, dissolve back into image. In a small side gallery, a painting by Brett Lund, “Alphaville” (2008), comprised of the word “Alphaville” broken up across the canvas’s surface, suddenly seems to bring it all together. It’s a future world, but a future world from the past—a world alongside our own, both like and unlike what we know. Violent but remote. We see it through a screen, but are no longer sure whether we’re in the film or in the theater. The credits are playing. The curtain is drawing closed. (Michelle Tupko)