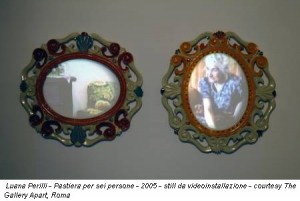 If you haven’t been to Albany Park’s new art gallery, Swimming Pool, the current show, “Video as Video: Rewind to Form,” is the perfect excuse for a Saturday outing (Saturday being the only day this independent space is open to the public). The curators are intent on delivering video that has been distilled to the essential characteristics of its medium, or at least that’s one way to understand the invocation of form as a throwback, a place in the past we’ve been cast out of. Many of the videos make this connection to form with a separate, embedded object. Rochelle Feinstein alters vintage television sets, Rob Carter’s “Reseed” takes place in the Wimbledon tennis courts, Mioon’s contribution is a documentation of a fluttering, feathery sculptural video installation, Julie Lequin’s idiosyncratic work is based on her book “The Ice Skating Tree Opéra,” and Luana Perilli’s extremely affective footage of her Italian grandmother is projected into decorative ceramic frames. It is tempting to suggest that these examples mark an expansion rather than a contraction in contemporary video practice. Taras Polataiko’s “Kyiv Classical,” is, by itself, a reason to visit. Also focused on an object of cultural identity and memory, “Kyiv” explores the defaced site in Bad Ems, Germany where Czar Alexander II issued a secret edict forbidding the use of the Ukrainian language. The video features a relentless sincerity and the song of a mysterious, never-seen bird that has learned to warble a classical Ukrainian tune. The limits of this gallery’s space require innovation and curators Alicia Eler and Peregrine Honig have come upon a viewing strategy that fundamentally alters the traditional experience of video in a gallery. Instead of projection, each video is presented in its own, personal-sized DVD player equipped with a single headset. In place of a crowded, dark room with the many distractions of people entering and exiting, gossiping and critiquing, one is left quite alone with the work in a startling, but positive, intervention into reception. (Rachel Furnari)