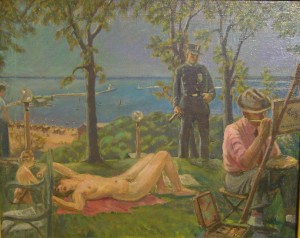 Why doesn’t anyone paint “the American scene” any more? Is it too superficial and cheap? Too much in need of political correction? Or has it just disappeared—fractured into a multitude of scenes cut by the boundaries of class, ethnicity, education and personal preference? Well, If you want to see what it was once like, visit the Gerrit Sinclair show at Richard Norton Gallery this month and soak in regional flavor from an artist born in Michigan, trained at the Art Institute of Chicago and who taught art in Milwaukee for the last thirty-five years of his life. In a way, spending a career more as a teacher than as a gallery artist or commercial illustrator was a good thing, because Sinclair needed to pander to no one. He only needed to show how he felt about things, and how he loved them. He loved that kind of sleepy, awkward, good-humored quality of Midwestern life, but he didn’t need to commercialize and caricature it like Norman Rockwell did for magazine covers. It was just how he lived and felt, and he could also be more of a craftsman about his work, carefully making something that could sustain closer study. He liked to paint the world around him, but he painted it back in the studio, as if it were a dream. There may seem something primitive about his blockish, non-anatomical figures, but there’s not. This was a man who had seen a lot of painting and whose school was located right beneath the great Layton collection of American painting. Why doesn’t anyone paint the American scene anymore? Actually, I’m sure they do, but the genre has suffered from the absence of regional art shows in our major museums. (Chris Miller)