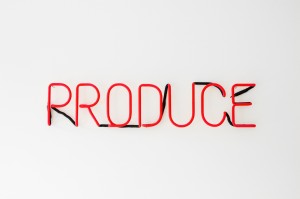 “What are you drawing?” I ask the gallery assistant sitting behind a desk sign that reads “Nakedly Transactional” (2008). I feel invited to talk to her. “And how do you feel about sitting behind that sign?” I’m surrounded by a menagerie of minimal statements and gestures. Another one of the Franks’ gestures sits adjacent to the desk sign. “Some Dangling Books” (2008) is a small, eponymous blank book placed next to a stack of postcards and the standard gallery sign-in book, also partially blank. I’m experiencing that classic Minimalist effect where I begin to question all distinctions. Is this postcard in the show? Is that phone in the back gallery in the show? Does it work? It’s the effect some friends of mine noted once, without knowing they were noting it, when they walked out of Dia:Beacon. “Like, this parking lot could be in the museum.” Exactly. Minimalism teaches us to finally see what surrounds us, and the Franks certainly participate in the conceptual tradition of questioning everyday objects and encounters so deeply that nothing seems to escape scrutiny. Part of what is so striking, but also so frustrating, about this show is the sheer accumulation of instances of the everyday. One gets the sense that the Franks are trying to make a statement—a microscopic statement—in as many media as possible. It’s as if there’s one of everything, each thing full with references and cross-references to other great works—“Ceci N’est Pas Une Magasin,” (2008) in neon, a Warholian row of aluminum dollar signs painted gold, low-fi photographs of signs, two office signs, cast quotation marks, stone markers, two white-on-white paintings, even a hand-etched mirror. Any one of these conceptual experiments, embodied in material, could be explored much further. The overall effect is intriguing, but penetration beyond the surface level is difficult. The eye and the mind are invited to rove, taking it all in, but letting it all go. As I leave, however, I do spend quite some time looking at the sun on the concrete just outside the gallery’s door. (Michelle Tupko)

The Franks, “An Improbable Coincidence of Wants,” show at Rowland Contemporary, 1118 W. Fulton Market, through October 25.