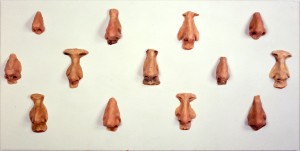 Identity—who we are, and how we make the case for it—is fraught territory, on both the personal and political fronts. Shirin Neshat’s “Rebellious Silence,” on view at the Spertus Institute’s “Twisted into Recognition: Clichés of Jews and Others,” is a case in point: in the photograph, a woman in chador regards us evenly, her face covered in Farsi script, and a rifle held up to bisect the plane of her face. It’s an image that tugs enigmatically at the layers of the self (in the steady, inscrutable eyes) and at Western notions of Islamic extremism. Identity always involves some sort of presentation, and it’s this boundary between inner and outer, between intrinsic being and curated persona, that proves so difficult to parse.

Two shows up now get at this boundary in very different ways. The Spertus’ “Twisted Into Recognition” dives headfirst into identity politics and the shifting line between knowing and stereotyping. Magdalena Abakanowicz’s “Reality of Dreams,” at the Block Museum, hugs the contours of the body, seeking self in the surfaces of things.

The chador in Neshat’s photograph is both instructive and confounding: black and blank, it becomes a ripe signifier of multiple roles. It cloaks, it defines; it obscures and reveals. The shell-like bodies of Abakanowicz’s life-size headless figures at the Block have a similar, shifting valence. Rendered in burlap and resin, they are more skin or armature than full body: peering around to their backs, you see nothing but the cavity of the surface yawning back at you. It’s a disquietingly sudden slip from body to garment. At times, Abakanowicz’s figures can feel a bit too pat, the same anxiety about essence yielding the same artistic result again and again. (Abakanowicz is best known in Chicago for her permanent installation “Agora” in Grant Park.) The figures at the Block, though, manage to successfully locate that ambiguous visual border between organic and inanimate in a way that is truly unnerving, the weft of the burlap suggesting now a ribcage, now merely the texture of a piece of fabric.

Abakanowicz is after something very elusive. You see hints of it in the drawings here, done in continual, rapid sketching, as though to locate the central volume of something (a figure, a fly, a tree) by tracing and retracing its contours. It’s a fretful quest that plays out in your own interaction with the sculptures. At the Block, the boy-like figures are lined up in two close rows almost flush to the back wall. Approaching them is terrifying: there is a palpable sense of expectation (they seem to be awaiting instruction, or deployment, or the looming approach of adulthood), but it’s a sense that refuses to come into focus as you advance. You can be inches from them, and still are no closer to grasping the particular humanness they intimate from afar.

The particulars of the human body are taken up by several of the contemporary artists in the Spertus show, as well. After all, physiognomy and skin color have been the basis for enduring stereotypes for centuries. Dennis Kardon’s “49 Jewish Noses” is one of the wittier and more nuanced pieces in the show. The noses were modeled in clay, all in person; at the opening, Kardon described to me the rather surreal and at times awkward process of gazing closely at, and recreating, such a stigmatized part of the Jewish body. At its best, the Spertus exhibition confronts us with the specter of our own preconceptions (as in Neshat’s or Kardon’s works); at its worst, it catalogs clichés without any critical apparatus for dismantling them. This is especially the case with some of the collectibles and objects from material culture (an ‘Uncle Tom’ bank made in China, a Tyrol mask that may or may not have been used in anti-Semitic Passion plays), often arranged into sloppily conceived groupings that prop up more than they reassess.

One question that the Spertus show never addresses head-on is the underlying reason for these stereotypes. Many of them were, in their own way, projects of knowledge. A 1926 skin-color chart from the Berlin Museum of Ethnography or the filing boxes for Franz Wastl’s hair samples (taken from Jewish prisoners before they were shipped off to concentration camps) are attempts to organize the world with disastrously lethal consequences. If knowing shades so easily into caricaturing, the real question is how we can ever reliably proceed? Abakanowicz’s figures demonstrate the very real terror of grappling with the core unknown without the aid of human symbols and clichés. Yet this leaves us in rather alien territory. We’ll have to hope that, given the choice, we’ll face the void within rather than the fictive ‘other’ of the stereotype; and that, if not allowing an identity more confident, it will at least be one at ease with its own instability.

“Twisted Into Recognition: Clichés of Jews and Others” shows at the Spertus Museum, 610 S. Michigan, through January 18, 2009. Magdalena Abakanowicz, “Reality of Dreams,” shows at the Block Museum, Northwestern University, through December 14.