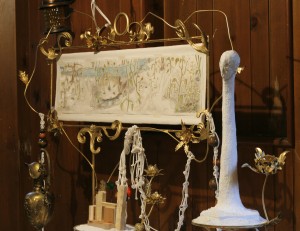 The art of Mindy Rose Schwartz helps me understand the city where I live: a landscape of endless avenues and rows of mid-century bungalow homes, bricks bracing for the chill, and corner bars touting an old style—a style not updated in decades but drunk down with pride. As radiators creak on for the first time this season, and the scent of winter’s onset hits the air, the mind is tugged back through some retrograde memories. But that smell isn’t mom’s cooking; it’s just a years’ worth of collected dust burning on the open radiator grill. Sometimes Chicago feels like a city-sized family room.

Macramé is a major component of Mindy Rose Schwartz’s sculptures. Just as knitting had its popular resurgence recently and crossed gender and generational lines, macramé was in full force in the 1960s and 70s. Knotters of the thin white rope proclaimed their medium’s potential to not only decorate a hanging plant, but also wore it as an emblem of the female movement. That is, where the first feminists decried crafts including macramé as pigeonholing femininity, the second wave found pride in so-called women’s work. That so much knotted rope can be tossed between ideologies and interior decoration delights Schwartz, but her work does not take a stance either way. To Schwartz, these forces animate macramé, along with other objects of personal value, and that is a good thing.

“I love to make things,” says Schwartz. She created and teaches a course for art students called Extreme Craft that explores the boundaries of the handmade. Her current exhibition of new sculpture features objects both literally and figuratively transported from her suburban Skokie childhood home. Many flaunt macramé, and some are without. The whole series is on view at Old Gold, an exhibition space in the wood-paneled basement of a Humboldt Park home.

Because Schwartz’s sculptures frequently conjure a suburban, middle-class experience, their presentation in Old Gold’s setting is like a fated love affair. One macramé web occurs on and around a fireplace. Mantles are common exhibition venues (perhaps the domestic curiosity cabinet), and here Schwartz delivers a hulking tangle of material that packs all the personality of Diane Arbus’ photograph of an oversize Christmas tree. Schwartz also creates her own credenza-type display shelves to host an assortment of ghost-like figurines, flowery ornamentation in metal, and mini Constructivist-esque wood assemblages. For Old Gold, she created some intentional pieces of décor such as ceramic owls for the basement’s built-in bar nook.

I asked Schwartz about the state of rawness or roughness—or even intentional ugliness—in her art. “It’s a real part of the world,” she says. “Prettiness and nausea”—they coexist. (Jason Foumberg)