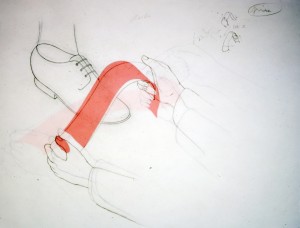 RECOMMENDED
Francis Alÿs lives and works in Mexico City where he is known for documentary-style projects addressing economic and social injustices in Latin American cities. “Bolero (Shoe Shine Blues)” is a traditional animation, hand-drawn in 500+ frames, which are also on display. The animation consists solely of a shoe shine: hands move a length of cloth around and across a shoe, syncopated with a minimalistic melody and lyrics written by the artist. Its swaying, repetitive quality draws the audience into a simple and elegant comparison of artistic labor, in the form of drawing, to the marginalized service economy of a global city. One views the frames beneath the loft where the film is projected, in a rough plywood room hung from ceiling to floor in a way that emphasizes the animation’s flipbook aesthetic. The second piece, “Politics of Rehearsal,” is a video that focuses on the rehearsal as a “metaphor of Latin America’s ambiguous affair with modernity.” In a disjunctive central passage a stripper rehearses to a simultaneous rehearsal of a Schubert Lieder, while the voiceover of art historian and theorist Cuauhtemoc Medina performs a cultural critique of economic development in Latin America. The visually striking image of the stripper’s fitful starts and stops, her alienated relationship to the musical production as the operatic duet is begun and paused and resumed, is not enough to save the analogy between the striptease and the promise of first-world development in third-world countries—a suspension of time which never leads to realpolitik and continually ends in deferral—from becoming a cliché about the history of American imperialism and the non-white, naked female body as the privileged sign of that exploitation. (Rachel Furnari)

Interesting insight. Gives me a new perspective on the exhibit. Thanks.